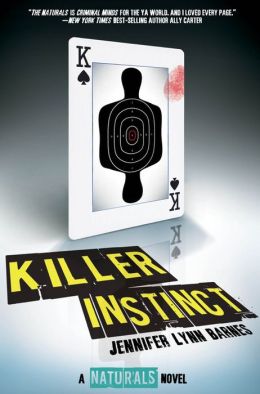 I had a few issues with The Naturals, Jennifer Lynn Barnes’ 2013 thriller about teen profilers working on cold cases in semi-secret for the FBI—the main one being that when compared to all of the OTHER profiler stories I’ve read and watched, beyond the ages of the main characters, it didn’t bring anything new to the table. But it was still a smart, funny addition to the genre, featuring quick, snappy dialogue; plotting with enough twists and red herrings to keep me happy; and starring a group of eminently-likable-if-easily-recognizable characters (the empathetic, red-haired heroine; the attractive-yet-brooding-and-possibly-dangerous love interest; the attractive-yet-sna

rky-and-possibly-dangerous other love interest; the manipulative-yet-sensitive girl who secretly yearns for trust and friendship; the socially awkward girl with the eidetic memory). So, yes, of course I snapped up the sequel, Killer Instinct, the moment it became available.

Fans of the first book won’t be disappointed: Killer Instinct has the same strengths (see above, and add a deeper exploration of what it means to be a Natural—these kids are all gifted, yes, but those gifts were all developed through extreme hardship) and weaknesses (see above, with bonus overuse of eyebrow arching* and endless angsting about a been-there-done-that love triangle with a practically predestined ending) as The Naturals, so while there’s still nothing new here, it’s also still entirely entertaining. If you’ve got a young person in your life who loves Criminal Minds, this series would be a perfect pick.

Three books with similar elements that I’ve got my eye on:

Same title, different premise. A 17-year-old girl becomes fixated on the serial killer that her mother—an FBI profiler—is tracking…and then he becomes fixated on her right back. IN THE MEANTIME (because that isn’t enough), she starts wreaking vengeance on criminals who escape justice. This one sounds quite a bit darker (and more explicitly gruesome) than the Barnes book, and reviews have been quite mixed…but oddly enough, there are few things that reel me in more quickly than mixed reviews. So, YES, PLEASE.

Spirit and Dust, by Rosemary Clement-Moore

I’ve been a fan of Rosemary Clement-Moore’s books for years, so

I’m not sure how I haven’t read this one yet. It’s a spin-off of Texas Gothic, and stars a teen psychic named Daisy who consults for the FBI and gets kidnapped by the mob, and the Kirkus review promises Egyptology and a dinosaur and cultists, AND compares the heroine to Jim Butcher’s Harry Dresden. Is it possible to sound more fabulous than that? I honestly don’t know.

Math whiz Farrah stumbles upon a terrorist plot; teams up with FBI rookie. They run all over New York City, having adventures and falling in love. I am ALWAYS on the lookout for more books about female mathletes, so I’ll definitely be picking it up soon.

*It was used 10 times that I noticed, which felt excessive in a 384-page book. Then again, it’s a documented pet peeve of mine, so it’s very possible that other readers may not find it as offensive.