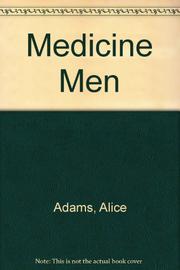 It's back to San Francisco and the genteel, graceful life—undermined this time by dark desire and disease—for the prolific Adams (A Southern Exposure, 1995, etc.), whose tenth novel is a virtual catalogue of physicians' moral flaws. Cock-of-the-walk Dr. Raleigh Sanderson, the city's preeminent heart surgeon, thinks nothing of ignoring his grandchildren, keeping a beautiful mistress, and boffing nurses as necessary to relieve his post-op erections; big-toothed Dr. Dave Jacobs, a widower, believes in total domination of the woman he's with; Dr. Mark Stiner, after driving his long-suffering wife to drink (as Dr. Sanderson has), takes up with a colleague. But the focus isn't really on these manly specimens, or even on their spouses, but instead on a couple of women, Molly and Felicia, best friends who have the great shared misfortune of being involved with medicine's finest. For Molly, divorced and widowed, the connection with Dr. Dave begins just as she falls ill, and her dependence on him grows when it's discovered that she has a golfball-sized tumor in her sinuses. He soon comes to dominate her every moment, until by skipping out on her last radiation treatment (and on Dr. Dave), she reasserts control of her life. Felicia, Dr. Raleigh's mistress, is utterly infatuated with the surgeon for a time, but when he hits her for stepping out on him she drops him cold. He stalks her, creeping nightly around her house, until he is foiled finally by her new man. Woven among with these two primary relationships are a host of lesser connections, of ex-wives to former husbands or lovers, brothers to others, creating an intimacy that often seems to flirt with the incestuous. But this is Adams's stock in trade, and her skill at sustaining an entre-nous point of view remains superb, leaving the reader flattered by the author's confidence, if a little uncertain as to her aims.