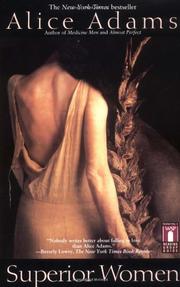 Through the decades with five members of the Radcliffe Class of '46--in a wan, pulse-less novel that has the limitations of the tinny Rona Jaffe genre but little of the compensating brio or drama. Adams' central figure, at least in the first half, is Megan Greene from California: plump, pretty, sensuous, bright, from a modest background (Mom is a car-hop)--and naive enough to get her 1943 heart broken, after lots of heavy petting, by an upper-class type who marries somebody else. ("Well, if that's being in love, I won't do that again. I'll settle for sex.") So Megan has affairs with a Jewish teacher and--on her visit to N.Y.C.--a black tromboneplayer. . . while her four favorite classmates have different sorts of love/sex problems. Bigoted, pretty Southern belle Lavinia, ever-cool about men, loses one beau in WW II, then quickly settles for a dull, appropriate Manhattan marriage. Fat, maternal Peg gets pregnant by a rich, boorish young Texan--and winds up with a swarm of kids and a nervous breakdown. Cathy, Catholic but otherwise barely characterized, gets jilted by a fiance, goes to California grad-school, winds up in an affair with a priest. Nice, feisty Janet, Jewish and pre-med, junks her career for bohemian marriage to sexy playwright Adam Marr, a sort of Irish Norman Mailer. And the women's lives will overlap here and there over the next 30 years, with one decade slurring into the next and virtually all major life-events occurring offstage: Peg turns to civil rights and lesbianism; Lavinia, sexually bored and panicked by age, has affairs--including one with a long-ago, crippled beau (now a rich, political biggie); Janet, losing Adam to a series of exotic women, returns to medicine; Cathy dies of cancer; and literary agent Megan has a long, rocky affair with charismatic left-winger Henry (Lavinia's sometime bedmate too)--but winds up, in a 1983 epilogue, with two lovers (Henry and the black trombonist), plus a new career down South. . . helping Peg to run a shelter for the homeless-and-unemployed. "Are some men put off by extremes of intelligence or even attractiveness in women--put off by superior women?" That's the theme of this unshapely saga--an iffy one, especially since the "superior" women here are so fuzzily drawn, so unconvincingly motivated, so oddly (in most cases) unappealing. Off-putting, too, is the marshmallow-y sentimentality beneath Adams' polished prose. Still, if this has little of the wit and shrewd social-history that lifted Mary McCarthy's The Group above gossip-sex-and-soap, it's probably Adams' most commercial fiction yet--with enough chic misery and quasi-feminist gloss to attract an audience with uncertain taste and certain pretensions.
Pub Date: Sept. 10th, 1984
ISBN: 0671020684
Page count: 390pp
Publisher: Knopf
Review Posted Online: March 15th, 2012
Kirkus Reviews Issue: Aug. 15th, 1984