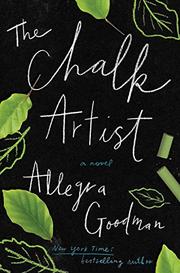 In Boston, an idealistic schoolteacher gets her artist boyfriend a job with her father’s video game company even as she's losing a promising student to the addiction of gaming.

Goodman’s (The Cookbook Collector, 2010, etc.) eighth novel takes place in two skillfully evoked worlds that are at war for the hearts and minds of young people: video games versus education, specifically high school English classes. Nina is the only child of the rich and powerful man behind Arkadia, a virtual-reality game company. Just out of college, she has taken a position with TeacherCorps and is now somewhat desperately attempting to communicate the joys of Emerson and Shakespeare to the ethnically diverse but universally bored students of Emerson High. Collin, the “chalk artist” of the title, is a 23-year-old dropout who works in a bar and can draw like an angel. Soon after the two fall in love, he finds himself designing horses on a high-tech tablet at the Arkadia image factory. Twins Aidan and Diana are Nina’s students, but Aidan is not doing his homework. He is deeply lost in the world of “EverWhen,” where his avatar meets and falls in love with a sexy Tree Elf named Riyah who says she can get him a pre-release of “Underworld,” Arkadia’s hotly awaited next game, if he will perform a real-world promotional task that crosses the line into criminality. The language and details of the games—sparkling aeroflakes, epic qwests, diamond flasks “filled with a hatchling dragon’s blood”—are the strongest and most original elements of the book: in fact, nongaming readers may be surprised to find themselves wondering if they are missing out on something. On the other hand, some of the plot developments relating to Aidan feel forced, and his twin almost seems to be living in a different novel with her weight problems and sexuality issues.

THE FAMILY MARKOWITZ
by Allegra Goodman

THE NIX
by Nathan Hill
Fiction

HOW TO WRITE A NOVEL
by Melanie Sumner
Fiction