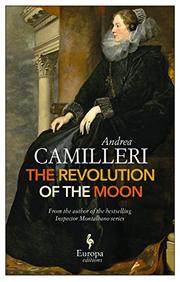 THE REVOLUTION OF THE MOON

In a tragicomic parable of justice based on a true episode, the corrupt 17th-century power brokers of Sicily meet their match in a canny, revenge-driven female viceroy.

Setting aside his popular Inspector Montalbano crime series, Camilleri (A Voice in the Night, 2016, etc.) offers a curiosity, fleshing out the brief episode in 1677 when a Spanish noblewoman filled in her for her dead husband as ruler of a patriarchal Italian island. Angelic of face, form, and voice, 25-year-old Donna Eleonora made no public appearances during her husband Don Angel’s two-year reign as Viceroy of Sicily on behalf of the King of Spain. But Don Angel, who arrived without an ounce of fat on him, mysteriously swelled to 400 pounds and expired suddenly during a Holy Royal Council session. His self-serving six-man council takes advantage of the sudden death to pass all manner of questionable measures, little expecting that the viceroy’s successor would expose their treachery. But they reckon without Donna Eleonora, who inherits Don Angel’s mantle and brings strategic brilliance and an unerring moral compass to the job. Replacing the council and overcoming an attempted coup led by the villainous archbishop of Palermo, she benefits the populace by halving the price of bread and setting up shelters for endangered women. Camilleri laces this true tale of exemplary leadership with humor that is sometimes farcical and slapstick, often simply wry. But underneath the geniality lies an all-too-plausible chronicle of entrenched financial misappropriation and sexual abuse, and while Donna Eleonora avenges her husband by punishing all who offended him, she is brought down by a religious edict that insists only a man can serve as viceroy. Thus ends her 27-day reign and a novel which lightly but elegantly revives an obscure historical moment.

A European historical footnote becomes a contemporary morality tale and a small, touching act of homage.

THE PYRAMID OF MUD
by Andrea Camilleri

A NEST OF VIPERS
by Andrea Camilleri
Mystery

A VOICE IN THE NIGHT
by Andrea Camilleri