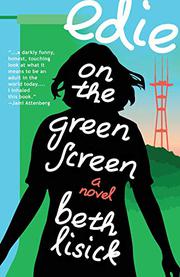 EDIE ON THE GREEN SCREEN

In Lisick’s (Yokohama Threeway: And Other Small Shames, 2013, etc.) debut novel, a former indie it girl comes to terms with the reality that she is no longer, in fact, it.

Her name is Edie. Or is it? The regulars at the bar think they know her, though they don’t. Edie’s been at this job, slinging the same old drinks, same old bar talk, “not doing shit,” really, for decades. She’s spent many a late night honing that skill, but now, at 45 years of age, she’s realizing she should’ve probably been sharpening others—like learning how to use a cellphone or, better yet, the internet. An erstwhile darling of the late-1990s underground party scene in San Francisco, Edie made bucking conformity her thing, so much so that when all her friends moved away and got jobs after the dot-com boom, she stubbornly stayed put in her sketchy Mission warehouse apartment. When her mother dies, Edie’s left to put her Silicon Valley ranch house on the market. As someone with an aversion to “adulting,” things don’t go over well for Lisick’s sulky protagonist. Tedious as it is to read about Edie’s self-inflicted struggles, Lisick’s languid prose has a magnetic pull to it (not dissimilar to the experience of watching a Noah Baumbach film). It’s pleasurable to tag along on Lisick’s winding tour through the Bay Area, even if the guide is kind of a drag. Oscillating between booze and boredom, Edie salts her wounds while bemoaning the “self-affirming inspirational platitude graffiti” that’s become rampant in her hometown. Ironically, though, Edie’s been avoiding clichés for so long that she’s inevitably become one. She does eventually learn how to navigate the web, but her self-awareness has a long way to go. Lisick’s stringent humor is what makes this tale worth reading, but the scant growth her character makes toward the book's end just doesn’t feel warranted.

Where the sun always shines, dark shadows will follow.

HELPING ME HELP MYSELF
by Beth Lisick
Nonfiction

EVERYBODY INTO THE POOL
by Beth Lisick

I USED TO BE CHARMING
by Eve Babitz
Fiction

A VISIT FROM THE GOON SQUAD
by Jennifer Egan
Fiction