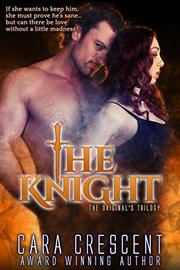 In this conclusion to a trilogy, a witch heals and protects her cursed vampire mate, a wanted criminal with the potential to stop a fallen angel bent on destroying humanity.

Faithful witch Katherine O’Hickey believes the goddess has guided her to her mate, Julius Crowley. People on both Earth and the daemon realm of Machon are hunting Julius for various crimes, such as putting “daemon kind back into” humans’ consciousness. But he committed these acts while possessed by a Watcher (fallen angel) for three centuries. Though the Watcher has been exorcised, Julius remains cursed, with a voice often persuading him to kill himself. Kat heals his wounds, primarily self-inflicted, and Julius gradually recollects memories of atrocities the possessed vampire perpetrated. Kat also keeps Julius’ presence hidden from friends, including witches Lilith and Trina, who share the title of the Original, which makes them the rightful leaders of daemon kind. An ancient poem further declares the Original will vanquish the wayward Watcher determined to end humanity—with help from the Knight. Kat is certain her mate is the Knight, if only she can keep him alive long enough. This won’t be an easy feat, because there’s a good chance she’s slowly losing her Magic. For each book in her fantasy trilogy, Crescent (The Shadow, 2017, etc.) has created an engrossing tale that is both part of a whole and a stand-alone. This novel, for example, inserts a previously established villain (Julius) into a fresh romantic storyline. It’s done convincingly, as Kat’s belief in her goddess-given mate is steadfast, despite his behavior sometimes resembling madness. This makes the couple’s anticipated sex profuse with tenderness, though the author doesn’t scale back on titillating passages: “He licked the crease of her leg. Nipped the underside of her breast. Suckled her earlobe.” Still, there’s room for plenty of supernatural action: to thwart the wayward Watcher, humans and daemons alike must battle the fallen angel’s monstrous children, the Nephilim.

A laudable denouement that may tempt audiences to read this skillfully fused fantasy series again.

THE SHADOW
by Cara Crescent
Indie

THE BEACON
by Cara Crescent
Indie

THE LAST MARINE
by Cara Crescent