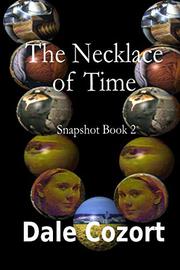 THE NECKLACE OF TIME

An author travels to another dimension to solve a mystery that has plagued him all his life in this sequel.

Simon Royale, a bestselling writer of horror novels, lives in a copy of the world that only contains North America—or, North America as it was on Halloween 2014. His writing is fueled, in part, by the mysterious disappearance of his sister, Cynthia, when he was 7 years old. The guilt he feels over the event is so intense that he is willing to take advantage of the opportunity to investigate a different copy of North America: one made in 1953. The two worlds have continued to develop along different paths, and US-53 (as it’s called) has its own Simon Royale—though he’s a failed, unpublished writer instead of a successful one. What’s more, the sister of US-53 Simon never disappeared. The Simon from US-2014 is going to meet his counterpart from US-53 in neutral territory: a third realm called Mega-Madagascar, which is overrun by German neo-Nazis from an alternative 1939 Europe. Confused? So is Simon US-2014. But as he attempts to solve the mystery of his sister’s disappearance and prevent his doppelgänger from stealing his identity and book sales, Simon US-2014 quickly finds himself in over his head. The SF book is even more convoluted than it sounds, but Cozort (Snapshot: Book 1 of the Snapshot Universe, 2014, etc.) unspools his Möbius strip of a plot with skillful ease. He has a lot of fun with its metafictional premise: Businesswoman Ella Smoot “still thought it was a great idea: Organize self-published writers from US-2014 for a book tour to the relatively untapped US-53 book market. No e-books there. No personal computers to speed up novel writing and create a gigantic, ever-growing glut of aspiring authors.” While not as straightforward as many popular alternative history novels, Cozort’s story explores the idea more fully and imaginatively than most. What’s more, he hinges his narrative on the small, personal problems of individuals rather than world historical events. The sequel is accessible to those who have no previous experience with the author’s Snapshot universe, and it will likely convince them to come back for more.

An original and comic take on alternative history SF.