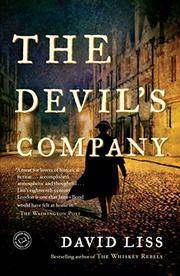 Someone has provoked the vengeful ire of wealthy Jerome Cobb, who engages Benjamin, a burly thieftaker and constable for hire (think Dog the Bounty Hunter with a more elevated habit of speech and a courtlier demeanor), to look into the suspicious death of one Absalom Pepper—whose sole known characteristic, apparently, is his ridiculous name. As Benjamin plies his unauthorized trade, gentlemanly and socially insignificant bad guys pop up everywhere, sorely testing his brains and brawn (he’s also an expert pugilist). Some of Benjamin’s best friends and dearest relations, it turns out, have made the unstable Cobb’s ever-lengthening enemies list. For example, Benjamin’s beloved uncle Miguel Lienzo, a prosperous importer who himself played detective most engagingly in The Coffee Trader (2003), has seen a costly cargo of wine “lost” while being shipped from Europe to England. As the plots thicken, blood is spilled, beautiful women are compromised; the powerful East India Company is victimized by commercial espionage; and almost everybody’s trusted servant seems to be working for a minimum of two masters. The signature flaw in the author’s impressively erudite series is his passion to educate us. So much specific historical, cultural, industrial and commercial information is crammed into this otherwise streamlined narrative that the reader’s brain seizes up in self-defense, hoping to avert overload; in the process, alas, it’s easy to get lost from chapter to chapter. Reading Liss is almost as much of a task as a pleasure, but it is a pleasure, and for those who hang in there, the rewards are quite considerable.

Witty and stimulating, albeit demanding, entertainment.

THE DAY OF ATONEMENT
by David Liss
Fiction

A SPECTACLE OF CORRUPTION
by David Liss
Fiction

THE COFFEE TRADER
by David Liss