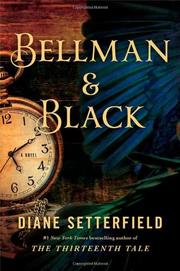 A boy hits the wrong bird with a slingshot, with lifelong consequences, in this second venture into gothic territory from Setterfield, author of the hugely popular The Thirteenth Tale (2006).

The book begins in the mid-19th century, in an English village whose focal point is a textile mill. At age 10, William Bellman, showing off for two friends, shoots a rook with a slingshot. Two decades later, William is rising rapidly through the ranks at the mill. He is the nephew of Paul, the owner’s son, however, William’s advancement is due more to sheer diligence than to nepotism. He has mastered every aspect of the mill’s operation when a series of unfortunate events advances his career prospects beyond his wildest dreams. The owner dies, apparently of old age, then Paul expires suddenly. Other deaths follow in quick succession, including those of William’s mother and Luke, one of two witnesses to the slingshot incident. Only the reader is aware, due in part to the appearance of these birds before each death and intermittent segments detailing the mythology and lore surrounding them, that rooks are harbingers of doom. William is oblivious, although a stranger in black appears at each funeral, regarding him sardonically. By now, William owns the mill since the last heir, Charles, an artist, also suffered a rook-related death after William’s artistically gifted daughter Dora showed Charles a drawing of her favorite black-plumaged bird. It isn’t until most of William’s family are wiped out by an epidemic that he suspects the strange Mr. Black’s role in all this. Desperate to save Dora, he enters into a bargain with Black, the exact terms of which remain obscure, even at times to William, but it involves opening a Selfridge’s-like London emporium specializing in the trappings of mourning and funerals. Although this novel succeeds in creating an atmosphere of creeping dread, the effect is attenuated by too much detail about the running of mills and department stores and also by a growing puzzlement over why an impulsive childhood transgression, never repeated, should exact such a terrible penalty.

A gothic tale in which moments of tedium are relieved by morbidity.

ONCE UPON A RIVER
by Diane Setterfield
Fiction

THE THIRTEENTH TALE
by Diane Setterfield

HOW THE DEAD DREAM
by Lydia Millet
Fiction

THE CASEBOOK OF VICTOR FRANKENSTEIN
by Peter Ackroyd
Fiction