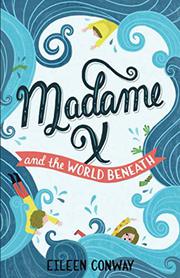 MADAME X AND THE WORLD BENEATH

A young detective takes on the case of her missing parents in this debut middle-grade novel.

Despite her conventional name, 10-year-old Susan Jones is no ordinary kid. As Madame X, she’s a private eye, solving such mysteries as a lost phone or stolen toys. Her parents aren’t routine either; they’re marine biologists, famous for their TV specials, who travel the world hoping to save the oceans. When they disappear, Susan has a new case to solve—which soon becomes wrapped up in another mystery. Susan; her best friend, Johnny Peters; and his 7-year-old brother, Teddy, discover bizarre elfin creatures called Thingamabobs living underground in Susan’s town. They claim to be purely beneficial to humans, but a note has warned Susan that “They have your parents.” A Thingamabob leader promises to help if Susan can find an errant Bob—but all is not as it seems. Following clues, Susan and her friends investigate beneath the town, where they discover that the area’s septic issues are related to Bob activities. The Bobs are trying to take over the entire underground and destroying the ecosystem above. A desperate note from her parents gives Susan her mission: “If you can save the creeks, you can save us.” Susan and her friends undertake a wild and often gross quest in underground sewers and creeks, hoping to save the Joneses and their town before it’s too late. In her novel, Conway tells an exciting story that appeals on several levels: as a mystery, an adventure, and an ecology parable. In addition to the striking plot, the characters are strong; Susan’s voice is a fresh and funny pleasure, as when describing being caught in a maelstrom of chilly sewer water: “It was like being in an evil, cold Jacuzzi.” Susan grows as she appreciates her ability to change the world, and she shows initiative, courage, and good instincts in her detective work. Also compelling are debut illustrator Angelovic’s images, which have a cool retro style that captures the book’s energy and originality.

An entertaining coming-of-age tale with a serious environmental message.