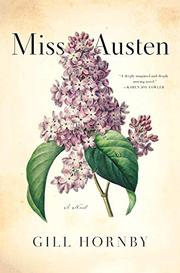 Sister of the more famous Jane, Cassandra Austen emerges as a figure in her own right, a woman who, although disappointed in love, finds fulfillment in her devotion to her sister, both in her lifetime and beyond.

“Poor, beautiful Miss Austen, condemned to eke out a sad life with nothing to do but care for others and control the temperament of her difficult sister” is the comical opinion of Jane Austen herself on her sister, Cassy, at least according to Hornby (All Together Now, 2015, etc.), whose animation of the close relationship between the siblings is the driving force of her new novel. Denied marriage and children after the death of her fiance, Cassandra becomes a model of duty and self-sacrifice, watching over her family generally and Jane in particular as keeper of the flame and guardian of her reputation. This role will include destroying any evidence detrimental to Jane’s future status, such as letters revealing a fragile, depressive side to her character. It’s on this mission that Cassy, in 1840, decades after her sister’s death, visits the Kintbury vicarage to sift through a stash of Jane’s correspondence. As Cassy reviews these letters, so the story flashes back to earlier episodes—of sisterly delight; of anxiety about the future when the Austens must leave their home after Mr. Austen’s retirement; of trips to Bath and the English coast; of meetings with potential suitors. All this offers Hornby the opportunity to observe the marriage market, women’s lot, and men’s dominion—though with a heavier satirical hand than Jane Austen’s—and also to suggest that members of Austen’s own circle might have inspired some of her characters. Cassy herself never quite convinces and the business of the book can seem scattered, but the evocation of the sisters’ closeness is solid.

ALL TOGETHER NOW
by Gill Hornby
Fiction