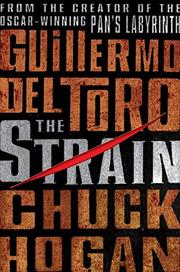 When a plane arriving from Berlin goes completely black on the runway at JFK, losing all electrical power and contact with the outside world, authorities expect to find a tense hostage situation on board. Instead, they discover that almost everyone on the plane has mysteriously died, presumably during the very brief interval between the time it landed and the moment a SWAT team stormed the cabin. Suspecting a disease of some kind and fearing its spread, authorities call in Dr. Ephraim Goodweather, head of a CDC team set up to deal with just this sort of fast-moving, potentially catastrophic epidemic. What Dr. Goodweather and his team gradually discover, however, is something much stranger and potentially even more dangerous: a species of parasitic worm that gradually turns its host into a bloodthirsty something that very closely resembles a vampire. Soon they are operating well outside the realm of established science, especially after they team up with Abraham Setrakian, a Holocaust survivor and former academic who now operates a pawnshop in Spanish Harlem and has dealt with this sort of thing before. Armed with Setrakian’s knowledge and an extensive arsenal of anti-vampire weaponry, the CDC team sets out to control the outbreak by attacking its source. The book boasts a plethora of arresting images and many terrific macabre touches. Del Toro and Hogan also succeed in constructing a driving plot and delivering a gripping conclusion.

Great characters, a semi-plausible premise and a flair for striking scenes get this trilogy off to a first-rate start.

THE FALL
by Guillermo del Toro

THE STANDOFF
by Chuck Hogan

THE BOOK OF THOTH
by Paul Leone
Fiction

A PEOPLE'S HISTORY OF THE VAMPIRE UPRISING
by Raymond A. Villareal
Indie