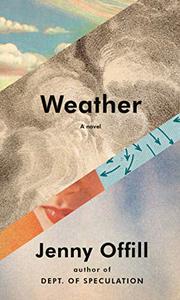 An ever growing list of worries, from a brother with drug problems to a climate change apocalypse, dances through the lively mind of a university librarian.

In its clever and seductive replication of the inner monologue of a woman living in this particular moment in history, Offill’s (Dept. of Speculation, 2014, etc.) third novel might be thought of as a more laconic cousin of Lucy Ellmann's Ducks, Newburyport. Here, the mind we’re embedded in is that of a librarian named Lizzie—an entertaining vantage point despite her concerns big and small. There’s the lady with the bullhorn who won’t let her walk her sensitive young son into his school building. Her brother, who has finally gotten off drugs and has a new girlfriend but still requires her constant, almost hourly, support. Her mentor, Sylvia, a national expert on climate change, who is fed up with her fans and wants Lizzie to take over answering her mail. (“These people long for immortality, but can’t wait ten minutes for a cup of coffee,” says Sylvia.) “Malodorous,” “Defacing,” “Combative,” “Humming,” “Lonely”: These are just a few of the categories in a pamphlet called Dealing With Problem Patrons that Lizzie's been given at work, Also, her knee hurts, and she’s spending a fortune on car service because she fears she's Mr. Jimmy’s only customer. Then there are the complex mixed messages of a cable show she can't stop watching: Extreme Shopper. Her husband, Ben, a video game designer and a very kind man, is getting a bit exasperated. As the new president is elected and the climate change questions pour in and the doomsday scenarios pile up, Lizzie tries to hold it together. The tension between mundane daily concerns and looming apocalypse, the "weather" of our days both real and metaphorical, is perfectly captured in Offill's brief, elegant paragraphs, filled with insight and humor.

Offill is good company for the end of the world.

THE FRIEND WHO GOT AWAY
by Jenny Offill
Newsletter sign-up