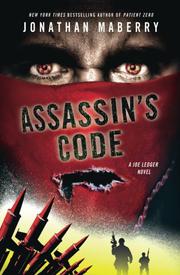 Even protagonist Joe Ledger, hero of three previous Maberry novels (The King of Plagues, 2011, etc.), knows that the premise of his latest adventure is totally ridiculous: Ledger scoffs at the idea of vampires with nuclear bombs, and Maberry can’t quite make a convincing case for them either.

At first Ledger, an agent with the super-secret Department of Military Sciences, believes he’s tracking some run-of-the-mill terrorists, who’ve planted several nuclear devices in various oil fields around the Middle East. But over the course of two intense, action-packed days, Ledger discovers a centuries-old conspiracy that involves a race known as the Upierczi, vampire-like creatures who are nearly immortal, drink blood, live in the shadows and are vulnerable to garlic. The Upierczi have been used as soldiers in a secret, ongoing pact between underground Christian and Muslim cabals to foster continued animosity between the two religions. Now the vampires are rising up against their masters, and they’re using nuclear weapons as their tools of rebellion. As Ledger and his DMS cohorts race to find and disable the bombs, various other secretive factions maneuver to protect their interests and take out their enemies. After facing down zombies, hybrid monsters and weaponized biblical plagues in previous novels, Ledger still has a tough time wrapping his head around the whole vampire thing, and the novel never really gets past the silliness of its setup. The more Maberry piles on the secret societies and far-reaching conspiracies, the harder it is to invest in the seriousness of the story and in Ledger’s angst about becoming a hollow killing machine. The sarcastic, skeptical Ledger is appealing enough, but his inner struggle (not to mention his potential romance with a deadly assassin known as Violin) is no match for Maberry’s hokey adventure-serial plotting and popcorn-movie action sequences full of meaningless bluster.

The story’s fast pace helps it go down easy, but it’s almost all empty calories.