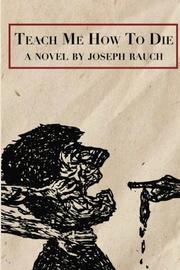 TEACH ME HOW TO DIE

Rauch’s fantastical novel tracks the afterlife of a widowed atheist.

Walter Klein is diagnosed with cancer and makes a principled decision to refuse treatment, essentially issuing himself an imminent death sentence. His wife, Susan, the love of his life, is dead, and with her went his attachment to this world. Walter continues on with his quotidian affairs—he plays in a jazz band, goes to work, and starts to spend time platonically with a woman, Leslie, whose appearance reminds him of Susan. When some repressed rage suddenly surfaces, he goes on a murderous rampage, killing Leslie and raping her, murdering two of his band mates and then his noisy neighbors. Walter wakes, discovering that he died in his sleep. Now he’s to be escorted in the afterlife by a guide named Vincent until the moment he is finally judged. Walter’s paroxysm of violence was part of a cleansing process, a kind of cathartic prelude to his judgment and did not occur in the physical world, but on some spiritual plane. Once evaluated, his judges will determine whether he is permitted to retain his “Right of Choice,” his prerogative to select either permanent nothingness or a sustained fantasy crafted specifically for him. Debut novelist Rauch slowly unfurls the moral cataclysm of Walter’s young life—a violent confrontation with his mother’s abusive boyfriend, an event that engendered an emotional rift between the two.

Rauch imaginatively conjures an entire underworld, not only characterized by a different metaphysical reality, but a different set of moral and juridical rules. Rapists are raped as punishment for their past transgressions, and a pedophile who exercised restraint is given guilt-free orgies with children. Walter is the fulcrum of the plot though, a profoundly complex man—loving but also brimming with volatile anger, a simple person who lived a small, precious life but is also capable of real emotional and philosophical depth. The judicial aspect of the novel is fascinating and provocative—a man who kills 157 people is taken to task not for the murders themselves—none of them were innocents—but for the delight he took in the killing. The theological cosmology that emerges—instead of the historical monotheistic god, a being or beings, simply referred to as “The Truth,” preside over all—is both a little opaque and overwrought. Also, there isn’t much of a supporting cast for the protagonist. Walter’s spiritual guide, Vincent, is the only other character fleshed out enough to even approach authentic personhood. The prose, though, is sharp and lively, and Rauch has a talent for the seamless integration of serious philosophical themes and bantering humor. This is an ambitious modernization of Dante’s Inferno, an homage to a literary classic that boldly stakes out its own creative and intellectual territory. Furthermore, Rauch furnishes a thoughtful reflection on the meaning of a life well lived.

A richly creative meditation on love, mortality, and the possibility of what lies beyond.

TEACH ME HOW TO DIE
by Joseph Rauch
Indie

IT IS ABOUT YOU
by Deborah Cupples
Indie