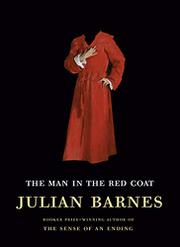 THE MAN IN THE RED COAT

A fresh, urbane history of the dramatic and melodramatic belle epoque.

When Barnes (The Only Story, 2018, etc.), winner of the Man Booker Prize and many other literary awards, first saw John Singer Sargent’s striking portrait of Dr. Samuel Pozzi—handsome, “virile, yet slender,” dressed in a sumptuous scarlet coat—he was intrigued by a figure he had not yet encountered in his readings about 19th-century France. The wall label revealed that Pozzi was a gynecologist; a magazine article called him “not only the father of French gynecology, but also a confirmed sex addict who routinely attempted to seduce his female patients.” The paradox of healer and exploiter posed an alluring mystery that Barnes was eager to investigate. Pozzi, he discovered, succeeded in his amorous affairs as much as in his acclaimed career. “I have never met a man as seductive as Pozzi,” the arrogant Count Robert de Montesquiou recalled; Pozzi was a “man of rare good sense and rare good taste,” “filled with knowledge and purpose” as well as “grace and charm.” The author’s portrait, as admiring as Sargent’s, depicts a “hospitable, generous” man, “rich by marriage, clubbable, inquisitive, cultured and well travelled,” and brilliant. The cosmopolitan Pozzi, his supercilious friend Montesquiou, and “gentle, whimsical” Edmond de Polignac are central characters in Barnes’ irreverent, gossipy, sparkling history of the belle epoque, “a time of vast wealth for the wealthy, of social power for the aristocracy, of uncontrolled and intricate snobbery, of headlong colonial ambition, of artistic patronage, and of duels whose scale of violence often reflected personal irascibility more than offended honor.” Dueling, writes the author, “was not just the highest form of sport, it also required the highest form of manliness.” Barnes peoples his history with a spirited cast of characters, including Sargent and Whistler, Oscar Wilde and Sarah Bernhardt (who adored Pozzi), Henry James and Proust, Pozzi’s diarist daughter, Catherine, and unhappy wife, Therese, and scores more.

THE ONLY STORY
by Julian Barnes
Fiction

THE NOISE OF TIME
by Julian Barnes
Nonfiction

THROUGH THE WINDOW
by Julian Barnes
Fiction

THE SENSE OF AN ENDING
by Julian Barnes
Newsletter sign-up