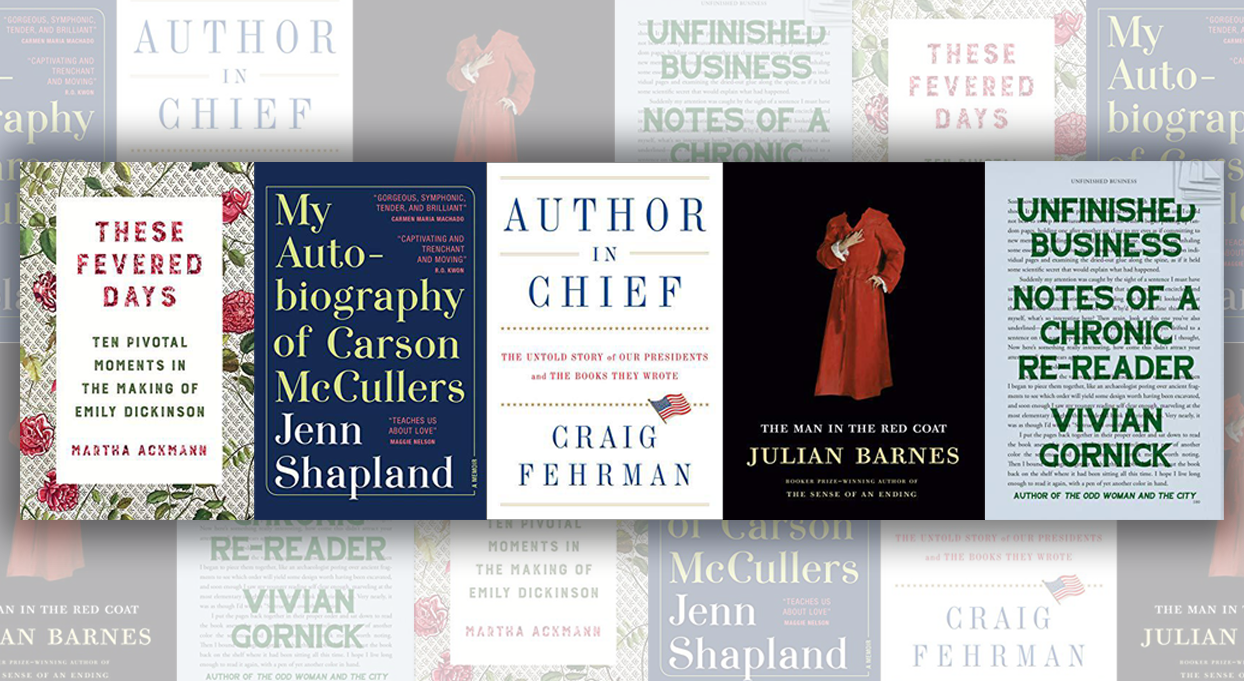 Since most Kirkus readers are book nerds, I thought it would be appropriate to recommend five books about literature and writers to get you through the dark days of winter ahead.

Martha Ackmann, These Fevered Days (Norton, Feb. 25): Widely considered one of America’s most significant poets, Emily Dickinson is also something of a shadow, what our reviewer calls a “shy wraith, dressed in white, refusing to allow publication of her poems—nearly 2,000, discovered after her death.” Ackmann, a Guggenheim fellow who taught a Dickinson seminar for two decades (in the poet’s Amherst, Massachusetts, house), takes a novel approach to this enigmatic artist, presenting 10 moments from Dickinson’s life that demonstrate her character and the mechanics of her creativity. It’s a refreshingly unique treatment of a much-discussed literary subject, characterized by “radiant prose, palpable descriptions, and deep empathy for the poet’s sensibility.”

Julian Barnes, The Man in the Red Coat (Knopf, Feb. 18): Though the primary subject of the award-winning novelist’s latest book of nonfiction is Samuel Pozzi, a 19th-century French doctor considered the “father of gynecology,” Barnes’ palette expands to encompass many other aspects of the fascinating belle epoque, including delightful cultural and social details and a cast of characters that includes not only the doctor (whom some accused of sex addiction) and some of his patients, but also Oscar Wilde, Proust, Henry James, and Sarah Bernhardt. As our reviewer notes in a starred review, “finely honed biographical intuition and a novelist’s sensibility make for a stylish, engrossing narrative.” One would expect nothing less from the Booker Prize winner, and he delivers yet again.

Craig Fehrman, Author in Chief (Avid Reader Press, Feb. 11): From the memoirs of Ulysses S. Grant through Barack Obama’s Dreams of My Father, many presidents have demonstrated literary talent and ambitions. (I will ignore the current occupant of the White House, whose execrable “business” and political books are worth far less than the paper they’re printed on.) Digging into this little-covered niche of presidential history, Fehrman emerges with a trove of material that will appeal to any book lover. “Overall,” writes our reviewer, “the author covers a great deal of ground that even major biographers have skipped over in favor of “sexier” storylines, yet to the book lover, these stories will be unquestionably enticing. Even the footnotes, appendix, and sources offer bookish gems.”

Vivian Gornick, Unfinished Business (Farrar, Straus and Giroux, Feb. 4): For more than five decades, Gornick has been a consistently illuminating presence in the literary world, from her days at the Village Voice in the 1970s through her tenure teaching writing at the New School. Indeed, our reviewer notes, “literature knows few champions as ardent and insightful—or as uncompromising—as Gornick.” Fresh off the publication of her well-received memoir, The Odd Woman and the City, Gornick offers this collection of essays focused on the virtues of rereading and the fresh insight that can be gleaned from revisiting a favorite work of literature. “For those willing to relinquish treasured but outmoded interpretations,” writes our reviewer, “rereading over a span of decades can be a journey, sometimes unsettling, toward richer meanings of books that are touchstones of one's life.”

Jenn Shapland, My Autobiography of Carson McCullers (Tin House, Feb. 4): In this elegant work of literary and biographical excavation, Shapland brings to light numerous elements of McCullers’ life, especially her sexuality. Shapland embarked on her journey while she was an intern at the University of Texas’ Harry Ransom Center, where she discovered some love letters to the author from Swiss writer and photographer Annemarie Schwarzenbach. The discovery came at a turning point in Shapland’s own life; inspired by McCullers, she writes, “within a year, I would be more or less comfortably calling myself a lesbian for the first time.” In this impressive debut, Shapland delivers “a sensitive chronicle of a biographer’s search for truth.”