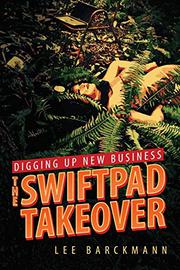 Some Oregon techies must deal with a possible serial killer in their ranks in this satirical mystery novel.

Portland, Oregon, 2013. Kipling Rehain, a failed “alternative energy” entrepreneur, aging pothead, and secret Luddite (he only recently learned what IT stands for), attends a programmers’ meet and greet at the Mission Theater. There, he meets Cynthia “GG” Oglethorpe, a tech wunderkind with a revolutionary idea for a social media app that will bring people together rather than fragmenting them into partisan tribes: “I want to architect it right so it actually means something. Not endless pictures of cute pets and birthday greetings….I want to do something that matches people based on their ‘anti-interests.’ Suppose everyone had friends who were the opposite of themselves?” With this meeting, SwiftPad is born, and it promises to make boatloads of cash for them and their backers. Meanwhile, a skeleton belonging to a woman who disappeared 16 years ago is discovered buried in one of the city’s utility vaults. It’s the same day that Kip’s old friend Jim Hunt starts working for the utility company. As a set of old cold cases reopens, SwiftPad’s future—and those of its founders—becomes inextricably tied to Portland’s past. Barckmann’s (Farewell the Dragon, 2017, etc.) prose is stylish and funny, particularly when he describes the changing face of the Rose City: “There seemed to be a disdain in Portland for things he thought were important: style, cars, fragrance, and the statement you made when you stood up and took off your sunglasses. And they had a thing about body odor, or rather didn’t. It was especially evident on the MAX train.” While his characters don’t always make realistic decisions—it’s unclear why GG would be attracted or even intrigued by Kip, but she sleeps with him mere hours after meeting him for the first time—the milieu is compelling enough to keep readers captivated. The book reads like a looser version of a Jonathan Lethem novel, riffing on gentrification and the tech industry while exhibiting a genuine love for detective tales and the Portland of old.