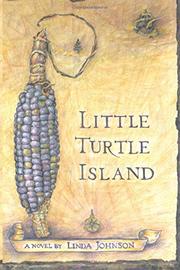 In this 16th-century love story, an Onondaga girl and a Welsh boy meet on a deserted island.

Following the death of her mother, Nushèmakw is raised by her mother’s clan in an Onondaga village, although her absentee father is Lenape. Naturally empathetic, she’s haunted by powerful visions and always somewhat alienated from her fellow villagers because of her mixed heritage. Nushèmakw is also ungovernably mischievous. After she twice interrupts ritual ceremonies and angers her cousin and warrior-in-training, Guiarasi, she is sent to live with her father and his people at the age of 12. But when her father dies as a result of a siege, she’s forced to flee unaccompanied to Little Turtle Island until it’s safe to return. Meanwhile, Owen, a Welsh boy, is sent to become a friar. He apprentices as a scribe, translating manuscripts. He resists taking the full orders to become a brother because the vow of chastity would prevent him from marrying and starting a family. He becomes entranced by the politically subversive writing of Sir Thomas More and is endangered when King Henry demands that all his subjects pledge allegiance to the crown at the expense of both God and the pope. Owen flees with his uncle Seamus and ends up washed ashore on Little Turtle Island, where he meets Nushèmakw. Both blessed with a facility for learning languages, they’re quickly able to devise a makeshift one with which to communicate, and they begin to fall in love. But Nushèmakw frets that a marriage between the two would imperil Owen since Guiarasi still hatefully vows his revenge. Johnson (Yellow Bird, 2010) writes in a meditatively poetic style, full of emotion and depth: “Then you came. This strange man, all alone. I saw then how large the universe is, and how many secrets it holds. I could see the whole world spinning under the heavens.” Both characters’ stories are powerful enough to stand alone, and the author dexterously weaves them into one coherent narrative. She also provides a penetrating, timely exploration of cultural difference.

A moving story about cultural alienation and familial identity.

THE LIFE OF THOMAS MORE
by Peter Ackroyd
Nonfiction