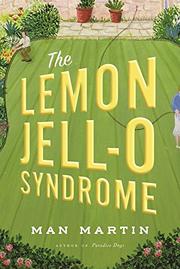 Martin (Paradise Dogs, 2011) presents a medical mystery in which the detective is also the victim of a rare and deeply threatening malady: loss of self.

Even before his self-alienation, grammarian Bone King is living a life of quiet desperation. His status as a lecturer at Atlanta’s Fulsome College is marginal at best. His first book, Misplaced Modifiers, seems to have sunk without a trace, and he’s so far behind on Words that his editor has stopped reading his incomplete drafts and his dissertation committee has basically given up on him. Lately he’s been worried that Mary Snyder, the former student he married, is carrying on an affair with yardman Cash Hudson. But none of these stresses seem adequate to predict Bone’s sudden, inexplicable inability to go through open doors. He brushes off an initial attack that sends him to the emergency room but after an embarrassingly inconvenient recurrence, agrees to consult the eminent neurologist/psychiatrist Dr. Limongello, whom everyone describes as an eccentric who can work miracles. The eccentric part is certainly on the money, as Bone realizes when Limongello tells him, sagely but obscurely, “Your condition’s root cause is a disjunction between how your hormones tell you to feel and a decent human response,” and advises him to try dancing through doorways he can’t walk through. Though Bone is no dancer, he does succeed in square-dancing his way through a number of stasis-inducing doorways and take on board some surprisingly effective longer-range advice from Limongello before an unfortunate series of events brings on a crisis that’s both unique and deeply expressive of the kinds of self-alienation many readers will recognize.

A slight, charming, gravely loopy bit of whimsy equally likely to appeal to amateur etymologists, untenured academics, spouses who fear cuckolding, and anyone who’s ever woken up with the feeling that they aren’t quite themselves.

AN ANTHROPOLOGIST ON MARS
by Oliver Sacks
Mystery

THE QUESTION OF THE UNFAMILIAR HUSBAND
by E.J. Copperman
Newsletter sign-up