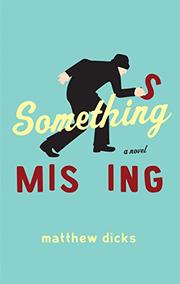 Dicks combines the neurotic atmosphere of a Woody Allen film with the light touch of Lawrence Block’s Bernie Rhodenbarr novels (The Burglar Who Thought He Was Bogart, 1995, etc.) in a unique debut.

The fantastically bizarre leading man, obsessive-compulsive Martin Railsback, specializes in stealing things that no one notices have gone missing. Early on, Martin’s vengeful, meticulous replacement of his abusive stepfather’s prized baseball card led him to his rule-driven life of crime. “If the missing item will be noticed, don’t acquire it,” is his first imperative, while his second requires a rigid awareness of his victims’ sense of perception: “When items go missing in a house, the suspicion of theft occurs only if the possibility of a thief exists.” Martin supplements his part-time job as a barista by stealing toilet paper, groceries and other necessities from wealthy suburban “clients,” as well as auctioning off their detritus on eBay. Dicks expertly crafts the setup, showing us Martin’s deep-seated need for stability and routine, then turning his world on its head when the compulsive thief accidentally knocks a client’s toothbrush into the toilet. This necessitates a nerve-racking, breathless mission to replace it—while its owner is home, no less. Turning a philosophical corner, Martin embarks on an altruistic mission, trying to make his clients’ lives a little better without their knowledge and risking his own tenuous subsistence in the bargain.

A very funny adventure about the mechanics of burglary and the fragility of an orderly life.

THE PERFECT COMEBACK OF CAROLINE JACOBS
by Matthew Dicks
Fiction

MEMOIRS OF AN IMAGINARY FRIEND
by Matthew Dicks