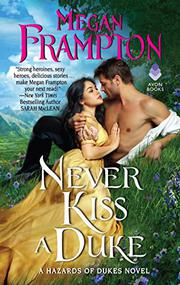 A sudden loss of nobility leads a former duke to his future bride.

When is a duke not a duke? When he’s Sebastian de Silva and he’s just been informed that his parents were not legally married, so his claim to be the Duke of Hasford is null and void. Unsure how to handle this abrupt change in circumstances, he and his friend Nash stumble into Miss Ivy’s, a new gambling house gaining renown for allowing any person with sufficient funds to play. He’s immediately interested in the proprietor, Ivy Holton, a ruined aristocrat who chose to open her own establishment rather than marry the man who'd won her hand from her father in a wager. Though she also finds him attractive, he ends up working for her, and he needs to stay employed for the first time in his life, meaning he can’t pursue her. As they continue to work together, however, there are multiple chances for the two to explore the chemistry that’s obvious to everybody but them—and finally, a “spectacular opportunity” presents itself and the two kiss. Ivy immediately apologizes for taking advantage of an employee, though soon after she and Sebastian agree that “it wasn’t just a kiss,” and a relationship begins to bloom. But if anything is to come of their attraction, Sebastian will have to make his peace with his new place in the world, and Ivy will have to decide whether she is willing to sacrifice her hard-won independence. This is the first entry in Frampton’s new Hazards of Dukes series, and if it does not quite live up to the magic of her earlier books, it’s still satisfying. Though Frampton (Never a Bride, 2019, etc.) is able as ever in developing promising subplots and a strong heroine, the tension of the plot is frequently lost, and Sebastian’s motivations can seem muddled. Despite this, both hero and heroine are likable, their amorous scenes are delightfully steamy, and Frampton has set up future installments well enough that readers can look forward to them.

A capable historical romance featuring games of chance and games of the heart.

A CHRISTMAS TO REMEMBER
by Lisa Kleypas
Fiction

WHY DO DUKES FALL IN LOVE?
by Megan Frampton

AN HEIRESS TO REMEMBER
by Maya Rodale
Newsletter sign-up