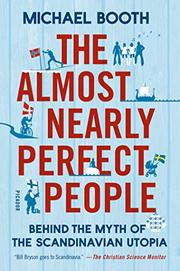 Behind the Myth of the Scandinavian Utopia
by Michael Booth
BUY NOW FROM
AMAZON
BARNES & NOBLE
LOCAL BOOKSELLER
GET WEEKLY BOOK RECOMMENDATIONS:

A shrewd look at Nordic life.

From Denmark, where he has been living for the past 10 years, British journalist Booth (Eat, Pray, Eat, 2011, etc.) set out on a jaunt through Scandinavia to investigate questions that mystified him: Why are the Danes, Finns, Swedes, Icelanders and Norwegians considered to be so “brilliant and progressive?” What accounts for the alleged Scandinavian miracle of economic and social equality? Are Danes really the happiest people in the world? In this bright, witty cultural critique, Booth concludes that Scandinavia’s success is no myth. Despite “historical skeletons” in some countries’ closets, irresponsible financial decisions that led to Iceland’s bankruptcy, virulent right-wing constituencies, and homogeneity that results in societies “a little too safe and dull, and insular,” Scandinavia, the author believes, truly is an “enviably rich, peaceful, harmonious, and progressive place.” In Denmark, paying the highest taxes in the world (72 percent in total) is seen as a contribution to the social good. Oil has made Norway the richest country—outpacing even Saudi Arabia—and sound fiscal stewardship funds generous social programs. In Finland, high status for teachers results in the best students competing for places in education programs and, consequently, excellent schools nationwide. Booth sees high-quality, free education as “the bedrock of Nordic exceptionalism.” Though he celebrates the region’s achievements, Booth is clear about the challenges ahead: in Denmark, fostering initiative in a society that extols thrift, caution and “sacred, ordinary mediocrity”; in Norway, maintaining “incentive to work, study, and innovate” in a society where one-third of working-age Norwegians “do nothing at all…proportionally the largest number in Europe.”

Blithely reporting on the many quirks in dress (Norwegian dirndls), food (an odiferous Icelandic fish specialty) and excessive drinking (everywhere) that he encountered on his journeys, Booth offers an affectionate, observant, engaging look at Scandinavia, where trust, modesty and equality proudly prevail.

NAMES FOR THE SEA
by Sarah Moss
Nonfiction

HOW TO BE DANISH
by Patrick Kingsley
Newsletter sign-up