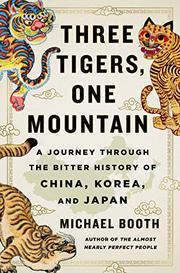 A Journey Through the Bitter History and Current Conflicts of China, Korea, and Japan
by Michael Booth
BUY NOW FROM
AMAZON
BARNES & NOBLE
LOCAL BOOKSELLER
GET WEEKLY BOOK RECOMMENDATIONS:

A British journalist's tenacious, on-the-ground reporting of the continued "sibling rivalry" among the three major East Asian economies, who "ought to be the firmest of allies."

Booth, long fascinated by the region, intriguingly compares the long-simmering resentment among China, Korea, and Japan to an ongoing family feud. Looking at the arrival of Matthew Galbraith Perry’s ships in Tokyo in 1853, the author writes, “China had been the Middle Kingdom, font of all knowledge, technology, and civilization; Korea was the primary tributary land, the middle sibling, and Japan the vaguely barbaric little brother, but the trauma of the [ships’] arrival lit the fuse for a quasi-revolution in Japan,” which ultimately led “to a catastrophic attempt to build an empire based on the Western model.” Via a systematic journey through these countries (first Japan, then China, then Korea), the author, employing a jocular, tongue-in-cheek, nondidactic tone, underscores how the bad blood—both popular feeling and political leaning—customarily emanates from Japan's strong-arm tactics and perceived lack of reckoning toward the other two brothers. As Booth points out, the hundreds of thousands of Koreans living in Japan after World War II, descendants of Japan's shameful annexation of Korea between 1910 and 1945, "faced heavy discrimination in the postwar employment market,” and they still endure stiff biases regarding citizenship and identity. In addition to land disputes, the unresolved wounds of the Chinese and Korean “comfort women”—enslaved by the Japanese military during WWII—continue to rankle relations. Chronicling his visits to museums and shrines in all three countries, the author gives an excellent sense of how each views itself in relation to the others—through what they teach (or fail to teach) to their own people. Booth’s simple yet ingenious thesis encapsulates so much of what is still going wrong there, with an ancient rivalry not likely to be resolved soon.

An evenhanded, accessible, and pertinent work of Asian history and current affairs.