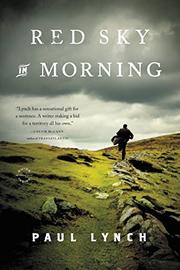 A novel of great beauty and violence from Irish writer Lynch.

Set in the 19th century, Lynch’s narrative first takes us to Ireland and to the desperation of its poorest people. Coll Coyle has a wife and young daughter (and another child on the way) and helps out on the farm of Hamilton, a ruthless landowner who’s recently informed Coll he’s being evicted for no apparent reason. In a rage, Coll goes to the landowner and, during an argument, accidentally kills him. This one event sets into motion the rest of the plot, for Coll must first hide and then escape, forced against his will to leave his family. Hamilton’s foreman, Faller, is relentless both in determination and in sadism, and he steps in to track down Coll. Faller tries to pry information out of Coll’s brother—and we find out that being “hanged by one’s thumbs” is, for Faller, not merely a turn of phrase. After a long sea voyage, Coll eventually arrives in America and finds work laying railroad track in Pennsylvania, work scarcely less exploitative and brutal than what he had been doing in Ireland. Faller, along with two creepy companions, is able to track Coll to the New World. Coll has befriended a man called The Cutter who helps him through some scrapes and narrow escapes, but eventually, the Cutter, along with a number of other men from the railroad, catches a virulent disease and dies. Despite being hunted himself, Faller continues his methodical and potentially deadly quest in search of his elusive prey. When Coll is burying the Cutter, he unwittingly provides a fitting epigraph for the novel: “The earth corrupt before him and filled with violence.”

Lynch's poetic prose is gorgeous. He lovingly crafts every sentence.

BEYOND THE SEA
by Paul Lynch
Fiction

THE BLACK SNOW
by Paul Lynch

NO COUNTRY FOR OLD MEN
by Cormac McCarthy
Fiction