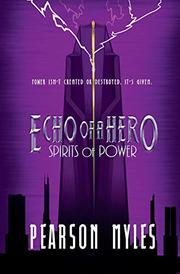 ECHO OF A HERO

In this YA SF novel, the first in a planned series, a teenager develops special abilities that could help an insurgent movement.

The city of Villhilium was destroyed by fearsome, black-armored “relegators” who killed or drove away the “plenaries,” a guardian race. Now, 20 years later, humans are forbidden to even mention the plenaries. In Newark, New Jersey, middle schooler Austin Bennett struggles with low test scores and a lack of friends aside from his best pal since childhood, Kate Summers. The boy suffers a string of misfortunes: His mother dies in a car accident that paralyzes him; he’s hit by strange lightning that leaves no traces; and he later wakes up with his bed on fire. But these strange events lead to enormous changes for Austin—he’s able to walk again, for one, and he soon discovers other, new abilities. By the time he’s 17, he’s able to run at superspeed. He joins a resistance group dedicated to bringing down the relegators that includes Maisie Orchid, a 16-year-old girl whom he admires for her daring acts. The rebels’ chief nemesis is Solon Blak, who’s described as a “sable pillar of foreboding” with a corpselike face. As Austin and the insurgents learn more about the plenaries, they also train themselves in the use of their abilities, work to rescue friends, and plot to take down Blak and his powerful orb. In his debut book, Myles does some complex worldbuilding and is consistently thoughtful about its implications. For example, it’s established that plenaries can reincarnate, and the author effectively addresses the disturbing aspects of the process; for example, one character wonders if others simply see him as a “mistake or an echo of someone they used to know.” The well-described action scenes add excitement to the narrative, and the varied characters receive strong backstories. At times, though, the many pages of explanation of how things work—such as powers, devices, and reincarnation—can become overwhelming. Even so, readers will find that they still have to piece together what “relegators” and “plenaries” are.

Good action and character development but the storytelling could have been tighter.