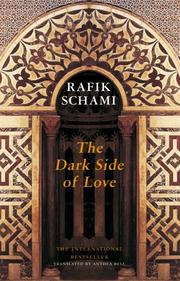 THE DARK SIDE OF LOVE

Romeo and Juliet meets Arturo Pérez-Reverte and John le Carré in the dusty streets of Damascus in this novel from Syrian-born Schami, a bestselling author in his adopted homeland of Germany.

The setup: The body of a Syrian intelligence officer is found in a rather unnatural position that rules out suicide. A police commissioner named Barudi steps in to investigate. Stop one is the alluring young widow, “composed, cool, and monosyllabic”—and utterly unhelpful, though Barudi, lonely bachelor that he is, allows that he “would have liked to catch a glimpse of whatever lay beneath her façade.” What lies beneath Madhi Said’s murder, however, is anything but monosyllabic. Bit by bit, Schami reveals an endlessly complex tale that turns on a simple universal: Boy meets girl, boy’s mom and dad disapprove, girl’s mom and dad disapprove, mayhem ensues. The Shahin and Mushtak clans are bound, as if by fate, to hate each other with pure fire, as young Rana Shahin and Farid Mushtak discover, try as they might to get away from the discord and merely be together. (“I want you to know,” Rana tells Farid, “that even if I have to wait all my life to live free with you for a single day, I won’t regret it.”) The reader soon senses, as this long but swiftly paced narrative unfolds, that there is more going on than an ordinary vendetta, for Schami is carefully describing life under one of the most oppressive dictatorships in the world, and moreover, the dissolution of ancient bonds that enabled Syria’s Christians, Muslims and Jews to coexist. Schami’s multilayered allegory is never obviously allegorical, but it is insistent in exploring the mysteries of identity (“His real name was not George Mushtak at all, but Nassif Jasegi”). The truth that Barudi eventually ferrets out pleases no one, and, as in all dictatorships, he is punished for it—caught, as it happens, in a blood feud of a different kind.

A rewarding and beautifully written, if blood-soaked, tale.

ALL FOR NOTHING
by Walter Kempowski
Fiction

BEFORE THE FEAST
by Saša Stanišic
Nonfiction

THE DAUGHTER OF PATIENCE
by Hussin Alkheder
Newsletter sign-up