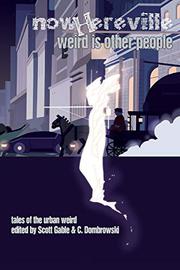 A short story collection provides mixed-genre, speculative fiction, with the tales bound together by mutual love, fear, and fascination with the concept and mystique of the city.

As Gable’s introduction puts it, “weird” fiction lies somewhere between the “Impossible” heights of fantasy and the “Inevitable” depths of SF. This anthology, edited by the team of Gable and Dombrowski (Welcome to Miskatonic University, 2019, etc.), aims to blend these elements—not to confuse readers but to present them with something that feels true in their uncertainty. Cities, then, form the perfect backdrop, as they feature constant cycles of new growth, preservation, and demolition as well as juxtapositions of wealth and poverty, high and low culture, and a melting pot of people, languages, and ideas. Cities represent the concept that anything can happen at any time while imparting the knowledge that true divergence from the quotidian is rare. The tales range as widely as the cities in which they take place, from Enugu, Nigeria, to a futuristic urbanscape called Punktown. Some, like Nuzo Onoh’s “Walk Softly, Softly,” in which a mysterious shadow haunts the dreams of men and steals their genitals, invoke a sort of fabulist horror to take on complex social ills. Others, like “Y” by Maura McHugh and “Nolens Volens” by Mike Allen, throw their protagonists into situations where they have little or no control over how things will turn out, their impossible choices mirroring real-life traps. Meanwhile, in Jeffrey Thomas’ “Vertices,” humans must contend with aliens who’ve merged with their own lost explorers, raising questions about adaptation and the cost of change. Throughout these and other stories, the beautiful, horrible, and, above all, the strange intermingle, producing a host of different sorts of surprising tales. The offerings vary widely in tone and style, but they are universally thought-provoking and engaging. What’s more, they complement one another in a way that’s rare even for collections by single authors, much less an anthology delivering 19 disparate voices. Indeed, the effect of this collection is not so much that of a set of loosely comparable episodes but of a kaleidoscope: variegated and multifaceted yet all of a piece.

Remarkably powerful urban tales, each one brilliantly in harmony with the others.