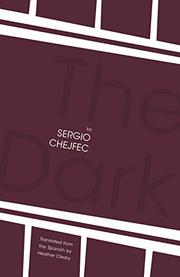 In this novel from Chejfec (The Planets, 2012, etc.), originally published in 2000 in the author's native Argentina, a man remembers his relationship with a factory worker whose life was different from his own.

Readers will find here a meditation on the working class, the circle of life and the pitch blackness of night. The nameless narrator tells the story as a remembrance, albeit one that haunts him. “It has always unsettled me that geography does not change with time, with the changes that take place within it, within us,” Chejfec begins. Every day, this writer sees a woman, Delia, get off a bus at the street corner near his home. Gradually, the pair begin to take long walks through the wastelands of the slums, as Chejfec lays out the geography of their nocturnal promenades, both literal and emotional. They become lovers locked in a secret embrace. However, the writer’s interest in Delia also extends to her work in a local factory. Coming from such a distinctly different social class from her intellectual paramour, she seems very alien to him, and he ruminates at length about the affect her work has on her, her relationships with co-workers and so on. There is much talk of the titular dark along the way. “Once there, I saw the silence before I saw the dark: a false murmur floated across the air, a hollow reverberation that came from nowhere in particular, but rather from the night as black as pitch,” Chejfec writes. This is a story that remains determinedly unresolved, as the writer mourns his relationship with Delia without saying what transpired. Readers who dare to navigate Chejfec’s intellectual labyrinth may find themselves mystified.

A wistful, winding contemplation of that long dark night of the soul.

THE INCOMPLETES
by Sergio Chejfec
Fiction

MY TWO WORLDS
by Sergio Chejfec

THE INCOMPLETES
by Sergio Chejfec
Fiction

THE FREE
by Willy Vlautin
Fiction

EXILE AND THE KINGDOM
by Albert Camus
Fiction