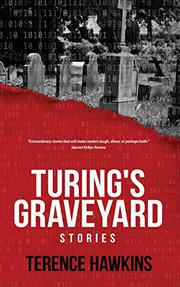 Opening with the creepy title story, an unnamed narrator connects online with a woman named Sophie for a steamy cyber encounter. But when he goes to meet her in the flesh, he learns Sophie had died months ago. So to whom had he been talking? Some of the subsequent stories are equally unsettling. In “The Darkness at the Center of Everything,” for example, the sun seemingly vanishes—from the entire world. Hawkins, however, also excels at genres other than SF. The amusing “A Call to Arms” follows a young boy who’s a reluctant participant in his stepfather’s American Civil War reenactment weekends. Watching the stepfather embarrass him in front of “the hottest girl in the whole Middle School” is hilarious, though the ending is a shocker. Similarly, “The Thing That Mattered” plays like a murder mystery, as Hemingway, in 1956 Cuba, tries to identify the person who shot and killed his friend Rick. Despite the multigenre approach, certain topics recur, most notably religion and infidelity. One of the most memorable tales involves the author’s take on the crucifixion of Christ. It’s engrossing without going to extremes; the man on the cross experiences human emotions, such as doubt, but is unquestionably the son of God. As for infidelity, several characters among the stories are—or may be—having extramarital affairs. “Crossed Wires” takes the issue seriously while the hungover and possibly philandering husband in “Like Leonardo’s Notebooks” comes across as a hapless buffoon. Hawkins often uses a first-person narrator, which doesn’t preclude descriptive passages. In one instance, he writes, “The mayor always made me wonder whether there was an extra Stooge who didn’t get through the screen test. He had rubbery lips and pop eyes and really bad hair.” The collection ends fittingly with two very short and very different stories: a farcical comedy trailed by a story featuring the book’s single most disturbing image.

Extraordinary stories that will make readers laugh, shiver, or perhaps both.