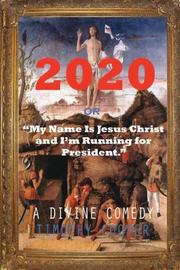 Or My Name Is Jesus Christ and I'm Running for President
by Timothy Cooper
BUY NOW FROM
AMAZON
BARNES & NOBLE
LOCAL BOOKSELLER
GET WEEKLY BOOK RECOMMENDATIONS:

Human rights advocate and author Cooper’s (World One, 1990) opus echoes the current state of contemporary unrest in Washington, D.C., and the world at large. In the book’s preamble, dejected Democratic National Committee Chairman Jerry McClellan concedes his position in the aftermath of the 2004 presidential election, in which “George W.” emerged victorious and swiftly turned the country’s political canvas a Republican shade of red. Dejected, mourning America’s ill-fated future, and “happy to have a safe place to hide,” McClellan takes up temporary residency in a used bookstore, dusting off a copy of a novel titled My Name Is Jesus Christ and I’m Running for President, agreeing that “Jesus Christ would make for the perfect moral values candidate in 2008!!!” Cooper’s ambitious literary undertaking becomes a novel within a novel as readers follow McClellan as he devours the anonymously authored story of Jesus’ campaign for the 2020 presidency. Cooper’s serpentine narrative finds the son of God descending from the heavens into Los Angeles on Christmas Eve in 2019 on the first stop of his “Born Again Comeback Tour,” which soon becomes his 2020 campaign for president of the United States. While definitely not for religiously sensitive audiences, the author’s eccentric and often hilarious satire depicts Jesus as a deity who also embodies an Everyman. He pops vitamin B12 and D pills, attends psychotherapy sessions to process the trauma of his crucifixion, and rubs hand cream into the scars of his stigmata.

Meanwhile, alternately narrating in first person, is Jesus’ hypercritical, hard-drinking, cocaine-snorting older stepbrother, who tunes into a remote live-feed to watch the Messiah’s every move from a Mexican safe house. Commenting that the charged atmosphere surrounding the deity’s revival is “a bit like watching daytime soaps,” the stepbrother sees Jesus being interviewed by the media about his intentions throughout his Second Coming and beholds the spectacle of a receiving line of Hollywood celebrities like Mel Gibson, Tom Cruise, Jennifer Lopez, and Bono. Both Arnold Schwarzenegger and Nancy Pelosi make feverish pitches to become Jesus’ disciples. Jesus is soon persuaded by the people to run for presidential office as a Democrat, but his stepbrother steps in as the opposing Republican candidate in a heated race complete with debates, Arab terrorists, and Stephen Colbert. This melodrama more closely resembles a whirlwind kaleidoscopic fever dream than a campaign trail chronology. By incorporating both first-person narratives of Jesus and his malevolent stepbrother, the novel becomes a unique and humorous political caricature parodying the country’s electoral process, its numerous hypocrisies and mudslinging behaviors, and (if thinly veiled) Donald Trump’s cabinet selection process. The rousing tale’s drawbacks, which include its meandering exposition and numerous typographical errors (“River Jordon”; “Long Ranger’s”; “Katherine Hepburn”), will perhaps be forgiven by readers enthralled by Cooper’s creatively inspired grasp on the concept of farcical political lampooning.

A rambling, curious, convoluted entertainment tailor-made for fans of political fiction who want a fantastical, vividly realized escape from the bizarro reality of contemporary government.

OFF SCRIPT
by Josh King
Nonfiction

YOU CAN'T SPELL AMERICA WITHOUT ME
by Alec Baldwin
Fiction