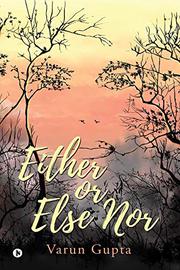 EITHER OR ELSE NOR

An unnamed man and woman reunite to talk about life, love, and what went wrong in this debut novella.

A woman texts a man out of the blue to meet and talk. He agrees. “Let’s start from the end,” he says as they drive around in his car, get food, and attempt to say the things that need to be said. But conversation proves harder than he imagined. They make small talk about his daughter, movies, and television shows. Sometimes they say nothing at all. Then one of them makes an effort: “This time he broke the silence and asked her, ‘Do you know anything about nothing?’ Now she let the question sink in and after an elongated pause replied, ‘Nothing.’ This infuriated him and he said, ‘You are not allowed to skip it as I want to know what you know rather than what not.’ ” They pull into a park and walk around in the night, discussing the purpose of lies, the momentary nature of life, and the pressure of expectations. They drive to a graveyard, finally at ease with each other, and try to describe the hollowness that they feel in their lives. Is one night long enough to reveal everything in the human heart? Is such an act even possible with someone you love? The novella has an intriguing premise and a simple, clear structure, and one could imagine a version of it that gets at the universal need for closure following a significant relationship. But Gupta places unnecessary constraints on himself by refusing to allow the characters to be specific people. The unnamed protagonists converse in a manner that is likewise anonymous, avoiding references to particular individuals or events in favor of abstract philosophical discussions. These talks are made all the more difficult to follow due to the author’s shaky, obfuscating syntax (which is accurately reflected in the work’s odd title): “There was some ad playing on the radio in a low volume giving a background score to dilute the friction. Every word wanting to come out seemed fake and hollow. His phone was resting in front of him and it reminded him of the text she sent today, ‘Can we talk till we have nothing to talk?’ ” As a result, the story feels fractured and self-indulgent rather than illuminating.

A tale about the difficulty of communication that suffers from that same problem.