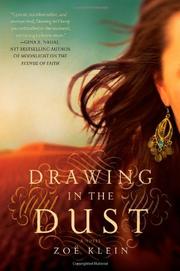 DRAWING IN THE DUST

Love-crazed 2,500-year-old ghosts prompt a discovery that shakes biblical scholarship to its foundations in Rabbi Klein’s far-fetched but zesty debut.

American archeologist Page Brookstone is burnt out. She’s labored for 12 years in a Jerusalem dig, unearthing jarred infant mummies. Her supervisor, Norris, has been harassing her ever since she rebuffed his drunken pass. So when Palestinian attorney Ibrahim Barakat appeals to her to investigate some scandalous otherworldly goings-on, Page can’t resist. The Barakat bungalow is located in Anata, birthplace of the sixth-century BCE doom-saying prophet Jeremiah. There, Page sees visions in kitchen steam of two figures embracing. Through a gaping hole Ibrahim dug in the living-room floor, she spots an underground chamber, its walls bedecked with frescos depicting Jeremiah’s life. Then, an even more incredible find: the burial crypt of Jeremiah. His bones are intertwined with a smaller skeleton, that of servant maid Anatiya, whose tell-all diary, inscribed on a scroll, turns up nearby. The Israeli government takes charge of the remains while Jewish, Christian and Muslim fundamentalists decry the tomb’s desecration. Soon Norris wrests the project from Page’s hands, forming a consortium to translate Anatiya’s scroll. Page digitally photographs the handmaid’s scroll, uploading it to her laptop. Back in the States, she enlists a female translator friend to render the text before the all-male committee puts its stamp on Anatiya and distorts her message, namely that her irrepressible love transformed even pessimism poster prophet Jeremiah. Will Page find love with Mortichai, a half-Irish Orthodox Jew who’s already engaged and is, in theory at least, opposed to grave robbing, even in the name of science? Will Anatiya finally have her say, countering the overwhelming patriarchal bias of the Bible? Even when narrator Page is at her whiniest, and Anitaya’s journal waxes most anachronistically New-Agey, these questions spur intrigue, though the finale devolves into a standard women-in-jeopardy melodrama.