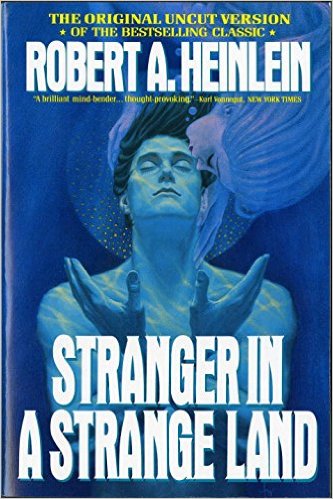 Filmmakers have been regularly mining the science fiction and fantasy bookshelves for film and television ideas. Now it seems as if they're once again reaching back into the bookshelves of yesteryear, as evidenced by this roundup of classic sf/f books that are being adapted to television and film…

Stranger in a Strange Land by Robert A. Heinlein

Heinlein's Hugo-Award-winning 1961 classic science fiction novel revolves around its messiah-like protagonist Valentine Michael Smith, a human who was raised to adulthood on Mars. Upon returning to Earth, Smith's alien views help him (and readers) see humanity in a new light. As he struggles to understand humankind's ways, he becomes a godlike figure to an ever-increasing following to whom he preaches the concepts of complete understanding ("Grokking") and free love.

Perhaps less controversial than the year in which the book was published, but no less relevant, Stranger in a Strange Land is still considered to be a classic and Heinlein's best work. That's why a television series adaptation is being produced by Paramount TV and Universal Cable for the SyFy channel. The longer format of a television series is the perfect format to examine Smith's teachings, his culture clash in dealing with other humans, and how he transforms human culture.

Starship Troopers by Robert A. Heinlein

Heinlein's not done with you yet! His other classic Hugo-winning masterpiece, 1959's Starship Troopers, is also due for an adaptation. Well, another adaptation. The book has already been adapted into a satirical and graphically violent 1997 film by Paul Verhoeven, and even spawned some sequels. Now, a reboot of the first film is being launched by Columbia Pictures. Instead of reimagining the 1997's film send-up of fascism, militarism, and propaganda, it is reported that the reboot will adhere more closely to Heinlein's novel.

The novel follows the rise of a soldier named Johnny Rico amidst a brutal interstellar war with bug-like alien creatures. This futuristic military science fiction adventure takes place in a society where citizen rights (like voting) are earned through voluntary service in the military. Rico, an excellent soldier, swiftly climbs through the ranks as his superiors are lost in battle.

Dune is another forthcoming classic adaptation that's been adapted before. Twice. It was adapted as a 1984 film by David Lynch (under the pseudonym Alan Smithee) and also as a television miniseries in the year 2000. The new adaptation is coming from Legendary Entertainment, who acquired both film and television rights to Frank Herbert's 1965 classic. Frank's son Brian, who has co-written many Dune sequels and prequels with Kevin J. Anderson, is serving as one of the project's executive producers. This is still in the early stages, but the latest rumor is that Blade Runner: 2049 director Denis Villeneuve is in talks to direct.

Dune is set in a feudal interstellar society of the distant future, in which noble houses own planets and owe allegiance to the Emperor. It follows young Paul Atreides as his family assumes stewardship of the planet of the desert planet called Arrakis, or Dune. Arrakis is the only place in the universe where you can find the valuable spice called melange. Dune details the rise of Paul Atreides to messiah of the indigenous Fremen, fulfilling a longstanding prophecy.

The planet in Le Guin's Planet of Exile is called Werel, a faraway planet that takes sixty Earth years to revolve around its sun. That means that winters on Werel are fifteen Earth years long. During one of these cold winters, the uneasy truce between the local hominid tribe and the population of a dwindling human colony is put to the test when a new threat of marauding invaders appears.

This adaptation was a long time coming. Le Guin's classic was written back in 1966. It's part of her extensive Hainish Cycle future history in which the Hainish people seeded the habitable planets of the universe with human life. The short novel is an excellent examination of the forces of social change. Hopefully, Los Angeles Media Fund, who only recently acquired rights, will preserve that feeling in their project.

The Chronicles of Amber by Roger Zelazny

The Chronicles of Amber is actually an entire 10-book series of fantasy novels written by Roger Zelazny between 1970 and 1991. It is structured as two 5-book cycles, each telling their own story arc. The premise of the world is that there exists two true worlds called Amber and the Courts of Chaos. Other parallel worlds (like our Earth) exist in the shadows between them, and the Royals of Amber can navigate the shadows to travel to other worlds and even create new ones. The first novel of the series, Nine Princes in Amber, centers on Corwin, who wakes up on Earth with no memory that he's a royal prince who possesses the ability to travel between dimensions of reality.

Zelazny's epic series – too big to be told on the big screen – is being adapted as a television series by The Walking Dead creator Robert Kirkman. Kirkman and his Skybound Entertainment partner Dave Alpert are hoping that The Chronicles of Amber is their Game of Thrones. Good news on that front is that Thrones author George R.R. Martin has cited Zelazny's Chronicles of Amber as a major influence.

James and the Giant Peach by Roald Dahl

Roald Dahl’s 1961 classic children's book is about a young English orphan boy who lives with his two horrible aunts. When James drops magic crystals by an old peach tree, one of the peaches grows to an enormous size. James enters the peach and has a surreal cross-world adventure filled with magically-altered garden bugs and wild adventure.

Here's another classic that's already been adapted – specifically, by Henry Selick into a 1996 fantasy film that combined live-action and stop-motion animation. Disney Studios is next in line to adapt Dahl's beloved classic. Disney aims to make a live-action version of the book and is in talks with Sam Mendes (director of the last two James Bond films) to direct.

"Inconstant Moon" is a 1971 Hugo-winning short story by Larry Niven that can be found in the collections All the Myriad Ways, N-Space, and, more recently, The Best of Larry Niven. In it, the narrator notices that the moon is unusually bright. While others appreciate its beauty, the more curious narrator surmises that the reason the moon is so bright is because the sun has gone nova, destroying all signs of life on the day side of the planet. He decides to spend his last night on the planet with his girlfriend before daylight brings the end. The title of Niven's story is from a quote from the balcony scene in William Shakespeare's Romeo and Juliet.

In 1996, Niven's apocalyptic story was made into an episode of The Outer Limits television anthology series. Looks like it will see new, er, light. 21 Laps and Fox 2000 production companies will be producing a modern version of Niven's apocalypse, which focuses on a couple on the verge of breakup against the backdrop of one catastrophic night in Los Angeles.

John DeNardo is the founding editor of SF Signal, a Hugo Award-winning science fiction and fantasy blog featuring news, reviews and interviews. You can follow him on Twitter as @sfsignal.
MORE FEATURES
POPULAR KIRKUS STARS