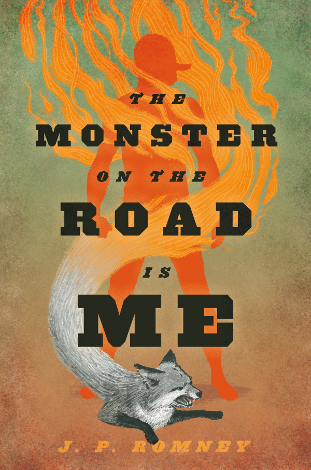 BOOK REPORT for The Monster on the Road is Me by J.P. Romney

I mean, there’s a fox on (or transforming from) fire on this cover. I couldn’t help but take the literal route.

(Also: Is the figure on the front wearing a low baseball cap, or does it have a really long nose? It’s like one of those “old woman/young lady” optical illusions.)

When kids at Koda Okita’s high school start killing themselves, the teachers and townspeople blame bullying. But Koda, who is no stranger to high school torment, thinks there’s something else going on. Something to do with the large murders of crows that seem to be following him, the mysterious girl who appeared out of nowhere wanting Koda’s help, old stories of a vicious demon who lives in the mountains outside of town, and Koda’s own narcoleptic episodes—during which he sees visions of traumatic events, including the deaths of his classmates.

Even though I haven’t been a teenager in a long while, I can often put myself in the shoes of the main characters of YA novels. In the case of Koda, however, I struggled with connecting, and not simply because he was a teenage Japanese boy (two out of three characteristics I’ve never experienced). Koda, who is a first-year in high school in The Monster on the Road is Me, just felt so young. He made some questionable choices on his path to figure out what was going on in his town, and I often felt the urge to pat him on the head and tell him things would get better when he was older.

There are a couple of kisses in The Monster on the Road is Me, and while they’re sweet, that’s just not what this book is about.

While reading The Monster on the Road is Me, I assumed that J.P. Romney was from or had lived in Japan; as much as I don’t know about Japan and small-town life there, the people and places Romney described in the story felt authentic. When I got to the end of the book, and the acknowledgements, my assumption was proved correct when Romney thanked the people of the town of Hidaka and a Japanese teaching exchange program for their assistance. I appreciate that a lot of research and experience went into creating a realistic town, and enjoyed the various aspects of Japanese folklore that were woven into Koda’s story.

What did occasionally make it hard to read, however, were the Japanese terms peppered into the book. I’m familiar with a few Japanese terms (sensei, samurai/ronin, arigato), but was totally lost on more than one (or ten) occasions in which Romney used a Japanese term without explaining or providing context clues. I often found myself pausing to look up a term, which threw off my reading stride.

I’m super glad this book introduced me to the tanuki, or Japanese raccoon dog, however. SO CUTE.

When Moya first arrives in Koda’s life, she doesn’t tell him a whole lot about herself, and she’s delightfully snarky in the process. There’s obviously more to her than meets the eye, but she’s also the type you have to be careful about prodding, or you risk personal harm.

You might be thinking, “WTF, Mandy. Narcolepsy is a serious condition and can cause major issues for people who suffer from it. It’s not to be taken lightly.” And, I promise you, I am not. I just don’t think I’ve ever read a book about a narcoleptic, and I found it interesting how Romney connects Koda’s disorder to the folktales at the heart of the story.

Although Koda discovers that extenuating (paranormal) circumstances led his classmates to kill themselves, it’s never easy to read about anyone taking their own life.

You had some good qualities, Book, and I feel like I learned something during our time together. But I don’t see us connecting on a deep, emotional level, and think we’re better off keeping things platonic.

The Monster on the Road is Me will be available Aug. 30.