Across the Solar System Through YA 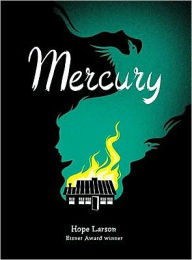 As I wend my way down to Baltimore for KidLitCon 2015, I’m sending you on your own journey—across the solar system!

Sun: I’ll Give You the Sun, by Jandy Nelson

I covered this one last fall, but it’s such a joy of a read that it deserves another mention. Twins Noah and Jude alternate chapters—Noah in the past, and Jude in the present day—to tell the story of how they went from tighter-than-tight to entirely estranged. It’s a story that shows the messiness and complexity of siblinghood told through two beautifully distinct voices. I wasn’t remotely surprised when it won the Printz Award earlier this year.

This one also uses alternating timelines, too, but it’s an ENTIRELY different reading experience. For one thing, the alternating timelines are generations apart, and for another, it’s in graphic novel format. It’s about family and starting over and love and trust and betrayal and long-unsettled spirits and about how our family histories affect us, even if we don’t know the stories. If you haven’t ever read Hope Larson, you’re missing out.

A story about a pyrokinetic girl who lives in Maine? Who longs to be out from under the thumb of Venus, the vampire who uses her as an assassin? But who has also created a family while working for said vampire? I haven’t read Firebug yet, but I loved Hold Me Closer, Necromancer, and judging by the premise alone, this one promises to hit a LOT of my buttons.

A trilogy about archaeology and disability set in the far future. The first t

wo sound FANTASTIC, with strong worldbuilding and a smart, skilled heroine. From what I’ve read, the third sounds more iffy, as it appears to introduce a plot twist that undermines much of the strength of the disability thread. Which is unfortunate. But the first two, like I said, sound SUPER.

Boxing in zero-gravity! People with genetic modifications to live on Mars! Criminal doings! Economic class and social justice on a space station! Why is this not in my hands RIGHT NOW?

Another book set in Maine! (Perhaps I am homesick before even leaving home?) It’s about sixth-grader Jackson, whose farming family takes in eighth-grader Joseph, a 14-year-old father. I made the mistake of reading it in public—at the laundromat—and proceeded to cry ALL OVER MYSELF. It’s about how life is unfair but also about how decent people doing good things can work to counteract that; it’s beautiful and spare and heartbreaking and I loved it, even if it made me so sad that I wanted to throw my used Kleenex in Schmidt’s general direction.

Another space station story! In this manga series, Earth has been turned into a nature preserve, and the humans have migrated to a manmade ring that circles our former home. The richest people can see the planet below—they can afford window washing—while most can only dream of looking outside. Our hero, Mitsu, is a window washer—he’s only in middle school, but took over his father’s job when his father died on the job—and it’s about culture and economics and society and the nature of home. It looks quiet and absolutely lovely, and I’m already happy about the fact that I have seven volumes to look forward to.

This was the planet that had be the most worried—for a while there, I really thought I was going to have to resort to Andy Griffiths’ Zombie Butts from Uranus!—but then I remembered this fantastic series, in which Uranus is referred to by its original name, Georgium Sidus, because "it provides less opportunity for cheap jokes." They’re wonderful neo-Victorian space operas about a brother and sister who live in a house that orbits the moon—they’re funny and playful and smart and good olde-fashioned fun.

Neptune: When Kambia Elaine Flew in from Neptune, by Lori Aurelia Williams

While we could use any of the plethora of Greek mythology–themed contemporary fantasies for Neptune—see Paula Morris’ recent The Eternal City for one—I went with an older title that I’ve been meaning to read for years. Kambia Elaine is set in a poor part of Houston, and focuses in on 12-year-old Shyla, who makes friends with the strange girl who moves in next door. Kambia has lots of stories about imaginary monsters…but she also has some very real injuries, so Shyla has to figure out what’s real and what’s not. Family and friends and trust and coping and survival and creativity and truth—everything I’ve read about it suggests that it’s a hard story, but also a beautifully written one.

Pluto: This Girl Is Different, by J. J. Johnson

Homeschooler Evie goes to high school for her senior year, makes a few close friends, sees problems with the culture at school, and responds by creating a group blog and manifesto called the People’s Lightning to Undermine True Oppression (PLUTO). Things spiral out of control quickly—other students use the blog as a way of calling each other out for various offenses—leading Evie to question pretty much everything she’s ever been taught about social justice, activism, and making a difference. I can never resist a great acronym, and the responses I’ve seen to this book are so varied that I feel like I kind of HAVE to read it.

Thoughts? Any titles that you’d replace, and if so, with what books?