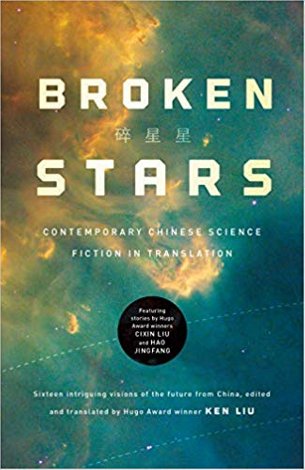 Short fiction is all around you. Not only do publishers continually release multi-author short story anthologies, single-author short fiction collections, and individually-published novellas…but there is also a ton of free online fiction just waiting to be enjoyed. I love the short fiction form, not only because I can experience a wider spectrum of stories more quickly than with longer novels, but also because short fiction helps fill in small amounts of idle time with reading.

Here's a roundup of my recent adventures in short fiction reading…

Broken Stars is an anthology of science fiction written by Chinese authors. (Read the introduction here.) Like any anthology, it showcases the breadth and variety of what science fiction can accomplish. The stories included here, for example, can be further sub-classified as cyberpunk, science fantasy, space opera and more. Anna Wu's entry is "The Restaurant at the End of the Universe: Laba Porridge," the title of which is immediately recognizable to science fiction fans as an homage to author Douglas Adams. (The fictional restaurant even includes an android waiter named Marvin.) More notable, though, is that Wu uses the framework of this faraway restaurant as a vehicle for telling multiple stories. "Laba Porridge" is the first story set here. The restaurant owner relays a story to his daughter about one of the customers, Ah Chen, a writer who rose to sudden success because he essentially made a deal with the devil. In this case, the devil is the Agency of Mysteries, an organization that will offer anything in trade. What Ah Chen wishes more than anything in the world is to be a successful author. His laundry list of talents (mastery over plot, prose, imagination, etc.) is to be borrowed from other writers in alternate universes. Ah Chen does get his wish, but at a terrible cost. The bittersweet story that Wu depicts is more parable than standard sf fare, but therein lies the demonstration that sf can be a literary chameleon.

"The Last Surviving Gondola Widow" by Kristine Kathryn Rusch, featured in Galaxy's Edge #38, is a magic-tinged fantasy set in late 19th century Chicago. The country is still feeling the effects of the Civil War and has even avoided a second one—an attempt by the South to attack the North with semi-sentient Gondola airships. The Gondolas are magically linked to their engineers, the so-called Gondola “wives” who became “widows” when the Gondolas were killed in the attack. People in this world have "large" and "small" magical abilities, like being a Gondola engineer or influencing others. The narrator of the story is a Pinkerton detective who witnessed the Gondola attack herself and did not come out of it unharmed. Her latest case involves a newly discovered Gondola widow, for whom she devises a clever plan to reveal her true identity. The world set forth here is interesting not only for its fantastical elements but also for the depiction of a post-war era. In doing so, it serves as a great example of how short fiction can entertain on multiple fronts.

A much darker tale can be found in the latest issue of The Dark. "The Wilderling" by Angela Slatter is about a married woman who lives on the edge of the woods. While her husband goes to work, LP tries to busy herself with one hobby after another. The hobbies, fleeting though they may be, at least keep her dark thoughts at bay—like morose fantasies about silencing her judgmental mother once and for all. LP's dark side comes to the fore when she spies a feral child emerging from the woods outside her house. Slatter's delivery is one that creeps up on you, becoming increasingly but subtly unsettling as it progresses, so that by the time you near the end of the story, you don't know which way it's going to go.

Mythic Journeys is an anthology predominantly composed of reprints of stories with a common theme: retellings of myths. What's immediately evident upon reading these stories is that any given myth is but a germ of any number of ideas. In other words, Mythic Journeys delivers twenty-seven fresh takes on classic themes that don't feel like retreads. The lead story, "Lost Lake" by Emma and Peter Straub, retells the story of Persephone, daughter of Zeus and Demeter (goddess of harvest, growth and nourishment), who was abducted by Hades and became his wife so together they can rule the underworld. Demeter, in her despair over her missing child, neglects the earth, causing a loss of crops and human suffering. When Persephone is finally found, she is forced to return home and Demeter allows harvests to flourish. However, Persephone must divide her time between home (in the summer months) and the underworld (in the winter months). In "Lost Lake," a similar arrangement exists with Eudora, the young daughter of divorced parents. For six months around Summer, Eudora spends time in Fairlady with her mother, whose ever-pleasant demeanor begins to wear on Persephone. During the other six months, Eudora spends time with her father in Lost Lake, a dark town with secrets. Although the story appears to take place in modern times, it retains the aura of its mythical origins. It just feels like you're reading a myth, albeit a more updated one about child custody since Eudora must eventually decide on her permanent home.

Lightspeed magazine #109 features an interesting story called "The Harvest of a Half-Known Life" by G.V. Anderson, which takes place in a ruinous land that suffers from intense waves of heat called sunsears. One of the people's sacred customs is to harvest the bodies of the recently-deceased to recover vital resources. Their minds, meanwhile, are "preserved" through books passed along to their families. The story opens with the narrator, Gwinaelle, witnessing the harvesting of her deaf mother, whose last message is interpreted by the narrator as "Follow the Ghosts." Gwinaelle, like her mother before her, lives her life among the ruins, apart from the townspeople, until the necessity of more food draws her back. The distance that Gwinaelle feels towards the townspeople mimics the distance she felt with her mother. The story asks us to wonder how much we really know each other, and how we can find a purpose. Gwinaelle gives meaning to her life when she finally follows her mother's dying words.

John Joseph Adams is no stranger to apocalypse. As the editor of several apocalypse-themed anthologies—including Wastelands: Stories of the Apocalypse (2008), Wastelands 2: More Stories of the Apocalypse (2015), as well as the anthologies making up The Apocalypse Triptych(2014's The End is Nigh and The End is Now, and 2015's The End has Come, all co-edited with Hugh Howey)—Adams has selected some of the best apocalyptic fiction to found anywhere. His brand-new follow-on in the Wastelands series, The New Apocalypse, continues this tradition. The New Apocalypse focuses on more recent apocalyptic fiction, collecting thirty-four short fiction gems released in the last several years (twenty reprints + 14 original tales new to this anthology) and proves that even subgenres need not become stale. Take, for example, the opening story by Elizabeth Bear, "Bullet Point," so named because Isabella the narrator has a penchant for bullet-listing things that no longer exist in the new world. It's been two weeks since everyone on the planet has seemingly disappeared, or at least that's how it looks to Isabella who has been wandering the streets of a vacant Las Vegas. Her world changes yet again when she meets a man named Ben and discovers that some things—like dangerous attitudes—will never die. Meanwhile, in "The Plague" by Ken Liu, it's fifty years after nanobots have infected most of humanity and altered them and the environment. The rest, huddled in the safety of domes, see the infected as inhuman because of all the changes they've undergone. Here, a man from the dome dons a protective suit to visit the people on the outside. The story serves as a stark reminder that what we consider "normal" is all a matter of perspective. There are thirty-two other gems waiting for me in The New Apocalypse—I hope to get to them soon.

Vigilance, just one of the many excellent novellas published by Tor.com, is a superb story about a violent near-future America that has become so familiar with gun violence that it embraces it. John McDean is the executive producer and marketing genius behind Vigilant, a hugely popular reality show where real-life armed psychopaths are let loose on an unsuspecting public. The random nature of the show ensures its success but it's McDean's marketing prowess—aided by fine-tuned equations and a control room full of underling accomplices—that drive the show's direction, maximizing the appeal of the show for the target audience. Bennet's tale is fascinating for several reasons. Before the show begins, we see some efficient world building and the mechanics that make the show work. When the show officially starts, the story becomes genuinely page-turning. A side story set at a local bar—the patrons of which are glued to the events unfolding on the television screen—serves as a microcosm of America itself. All of this can easily lead to a story that sounds overly preachy about the dangers of gun violence, but in Bennet's skillful hands it never comes off as such. Instead, you get a story that's part warning, part entertainment, and completely riveting.

The October Man by Ben Aaronovitch

The October Man is a long novella set in the same world as the Peter Grant series (which begins with Rivers of London) and is also about a magic-wielding police detective who solves supernatural crimes. The October Man moves the supernatural mystery to Germany where Tobias Winter works or the KDA, the branch of the German police that deals with the supernatural. Tobi is investigating the mysterious death of a man covered with a fungus and is paired with a local, non-magic-wielding cop named Vanessa Sommer, who is endlessly curious about Tobi's magical abilities. That's good news for readers new to the series; through Vanessa's inquiries we get to learn how the magic of this fascinating world works. It is soon learned that their murder victim—and soon another one—were part of a wine drinking club. Further adding to the intriguing world building is a link between the crime and a centuries-old conflict. Aaronovitch skillfully blends all of these world-building details into the narrative in a way that's engaging and fun. The mystery drives the plot forward as one would expect; leads are followed, suspects are questioned (one of them a river goddess), and Tobi uses his magic-detection skills to find out the truth. What make this urban fantasy additionally appealing is seeing Tobi use his magic alongside Vanessa's good detective work. If you're familiar with the Peter Grant series, this one is a must-read. If you're new to this setting, then The October Man makes a great entry point.