All Dressed Up with Jen Wang 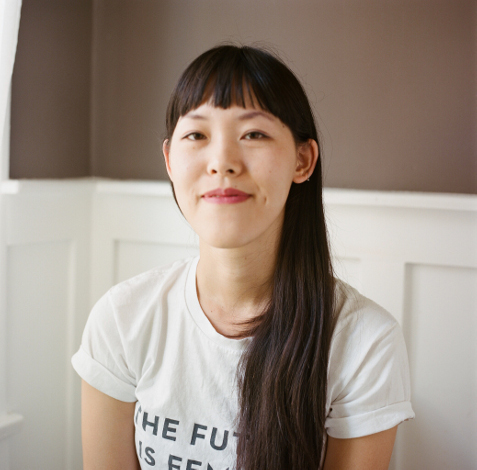 Imagine, if you will, the talk of the town in 19th century-Paris: Lady Crystallia. She is a fashion icon, dazzling crowds at night clubs throughout the city. And, unbeknownst to anyone but Frances, the talented, hard-working seamstress who creates Lady Crystallia’s gowns, the Lady is actually Prince Sebastian. He loves to wear dresses, something he doesn’t tell his parents, who happen to be looking for his bride. Frances keeps Prince Sebastian’s secret—she wants to learn to be a great designer, after all, and she sews some truly stunning crowd-pleasers for the prince—but keeping his secret means she must keep her own talents hidden as well.

Underlying this complicated relationship at the heart of Jen Wang’s new graphic novel, The Prince and the Dressmaker, is a tender and untenable bond of friendship—and even a hint of romance. This compelling story of identity and acceptance is told via Wang’s richly detailed, deliciously-colored drawings; if you like lush, gorgeous gowns, you will especially appreciate the visual feast this story is. I chatted with her via email to ask her a bit about these unforgettable characters and the story they tell, and I asked her about Comics Arts LA, the annual comics festival she co-founded nearly five years ago.

Jules: Can you talk about when you knew you wanted to tell Sebastian's story?

Jen: For a while, I’d wanted to write a story about a character whose super power was making clothes that transformed the wearer. I couldn’t think of a premise that fit until I was watching RuPaul’s Drag Race one day, and suddenly everything clicked. I’ve also wanted to do something fun, like a Disney princess movie but with more queer themes attached, and everything fell in line perfectly from there.

Jules: It looks like it was fun to draw all these beautiful dresses. Are you a fashionista at heart?

Jen: Oh, it was the most fun. It’s the indulgent fashion comic I would’ve wanted to read as a teenager. I’m more an admirer of fashion than one in practice. I’m definitely more of a Frances, someone who likes to be behind the scenes—working on the dress, rather than the one wearing it.

Jules: This is set in Paris during "the dawn of the modern age." What was your research for the drawings like?

Jen: I ended up spending a lot of time on Pinterest, honestly. There’s a huge trove of historical reference images, as well as costumes that people have collected over time, to dig through. It’s a super interesting time with a lot of technological and social changes — the sewing machine became widely popular in this century which revolutionized the whole clothing industry — and I spent hours pinning things for inspiration.

Jules: In your mind, what are Prince Sebastian/Lady Crystallia and Frances doing five years from now?

Jen: Ooh, this is a good question. I typically don’t like to assign updates about the characters, because I’m happy to let readers come up with their own interpretations. But generally speaking, I hope Frances is killing it as a top fashion designer and Sebastian/Lady Crystallia is at her side, showing off all the latest designs and living life proudly!

Jules: Tell me about Comic Arts LA, which you co-founded.

Jen: Comic Arts LA is an annual indie comics festival, based in Los Angeles. It’s free and open to the public and a great showcase for artists to share their work in one of the largest, most diverse cities in the country. We had our fourth year last December, and I’m excited about the new more community-oriented things we want to incorporate into the existing model. It’s been a wonderful experience for me, someone who has always been interested in community projects but didn’t have an outlet for it. I want it to be a space where people can find inspiration and connection at any level of interest or skill. It’s an ongoing project, and I’m excited to see how it evolves.

Jules: What's next for you? And will there be a sequel to this story?

Jen: I’m currently working on a new book, not related to The Prince and the Dressmaker. As to whether there will be a sequel, I don’t know! I wrapped up a lot of ends in this book, and I’d only want to do a sequel if I come up with a story worth telling. So, no current plans — but I leave open the possibility if inspiration strikes.

THE PRINCE AND THE DRESSMAKER. Copyright © 2018 by Jen Wang. Illustration reproduced here by permission of the publisher, First Second, New York.