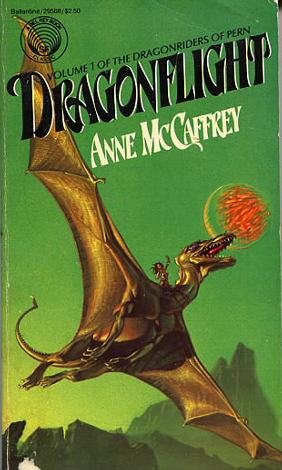 Women are frequently under-recognized in the science fiction and fantasy fields, for any number of reasons. The common narrative is that women began to appear in SF/F magazine in the 1960s and ’70s. As we’ve seen with this column, that’s entirely false: Women had been writing in the genre since the early 20th century, including Francis Stevens, C.L. Moore, Judith Merril, Margaret St. Clair, Katherine MacLean and many more. One such author is Anne McCaffrey, whose popular Dragonriders of Pern series ran for dozens of entries, ranging from short stories to novels.

Anne Inez McCaffrey was born on the first of April, 1926 in Cambridge, Mass., the daughter of George Herbert McCaffrey and Anne Dorothy McElroy. The family followed George to New York City, settling in Montclair, N.J., shortly before the Great Depression rolled in. Anne, along with her two brothers Hugh and Kevin, grew up in a large home filled with animals and stories. Her father read to his children often, such as The Jungle Book by Rudyard Kipling, and the Tarzan stories of Edgar Rice Burroughs.

As a teenager, Anne attended the Stuart Hall School in Virginia, a private girl’s academy. She began writing at an early age, and succeeded academically at the school. At this time, she was particularly influenced by Austin Tappan Wright’s novel, Islandia. However, despite her academic successes, she described herself as a “headstrong Northerner who was also a Catholic” in a predominantly Episcopalian school, and eventually returned to New Jersey. Shortly thereafter, she attended Radcliffe College in Cambridge, Mass., where she began to sing and act on stage. In 1949, she married.

McCaffrey never gave up writing throughout this time. A roommate of a former roommate, Lila Shaffer, who was an editor at Amazing Stories and Fantastic Adventures, encouraged her to write when she learned that McCaffrey enjoyed reading science fiction. “I never had any trouble about writing SF, whether I used a woman as the main character or a man. For starters, no one told me a woman shouldn’t write SF…for this attitude, I’m indebted to Lila Shaffer.” Shaffer encouraged McCaffrey, reading and critiquing some of her earlier stories.

In 1952, McCaffrey wrote and sold her first science fiction story to Sam Moskowitz at Science Fiction Plus, a new magazine helmed by Hugo Gernsback. The magazine was no pulp: glossy and high quality, the publication marked the return of Gernsback to the science fiction publishing field. Her story, “Freedom of the Race,” featuring a rebellion of human women against Martian invaders, was a particularly feministic one inspired by the ongoing civil rights movement around her. “There was a lot of excitement over Civil Rights then, and I was trying to get pregnant. So it occurred to me that one of the most basic rights was having a child of your own species. So, I sat down and typed out ‘Freedom of the Race.’ ” The story appeared in the October 1953 issue of Science Fiction Plus, edited down to a mere 1,000 words, qualifying it for the magazine’s monthly contest and prize of $100.

McCaffrey’s next story wouldn’t come for another six years, but it would have a major impact on her career as an SF author. “Lady in the Tower” appeared in The Magazine of Fantasy and Science Fiction, pulled from the slush pile by associate editor Algys Burdrys. McCaffrey noted that she thought up the story dealing with two small children underfoot, “wishing herself alone, like a lady in an ivory tow

er." The story appeared in the April 1959 issue of the magazine, and attracted the attention of editor Judith Merril. Merril enjoyed the story considerably, having come across it while working on the The Year's Best S-F: 5th Annual Addition. She invited McCaffrey to join her at the Milford Writer’s Conference in Milford, Pa., in 1959. There, she introduced the budding author to SF agent Virginia Kidd. The pair formed a lasting partnership that would last over the course of their careers.

McCaffrey’s third published story was “The Ship Who Sang,” which appeared in the April 1961 issue of The Magazine of Fantasy and Science Fiction. Written with the help of her Milford experience, the story was a special one to her, described as a sort of elegy to her late father and a striking cyborg story following a deformed girl controlling (and becoming) a spaceship. The story was eventually expanded into a novel. John Clute said about the novel that while “less popular than Pern, may stand alongside McCaffrey's main sequence as her most significant accomplishment in the field.”

McCaffrey took another extended break from the field, with her next short story publishing in March 1966. “The Ship Who Mourned” appeared in John W. Campbell’s Analog Science Fiction and Fact, and was followed later that year by “The Ship Who Killed” in Frederik Pohl’s Galaxy Magazine.

One of McCaffrey’s most famous stories came out of the Milford conference. Virginia Kidd read the early parts of the story “Weyr Search” and told McCaffrey: "Oh, Annie, do please finish it." She submitted the manuscript to Campbell’s Analog, who accepted it and published it in the October 1967 issue. The story was a hit, and won her the Hugo Award for Best Novella in 1968 alongside “Riders of the Purple Wage” by Philip José Farmer. She was the first woman to win the award.

John W. Campbell was hooked by McCaffrey’s world of Pern, and he helped to develop the planet and the epic story she was writing. He urged her complete another story, titled “Dragonrider,” which was eventually serialized between the December 1967 and January 1969 issue of Analog. McCaffrey was particularly influenced by the world around her: "Because America was so divided over the Vietnam War at the time, Anne wanted a world unified against a common, undeniable enemy. So she came up with Thread, mindless, voracious, spaceborne. The dragons became the biologically renewable air force, and their riders 'the few' who, like the RAF pilots in World War Two, fought against incredible odds day in, day out - and won."

Her Pern stories revolved around the elaborate world of Pern, colonized by humanity in the distant past. Life on the planet was perilous, as periodic assaults by Thread threatened all life. But the assaults are held back by a group of riders atop indigenous, genetically modified and telepathic Dragons. McCaffrey’s first novel in the series followed Lessa, who was orphaned and selected to become a Dragonrider in a time when their use was widely questioned.

“Dragonrider”  likewise earned McCaffrey praise from her fellow fans, earning her the 1969 Nebula Award for Best Novella and a nomination for that year’s Hugo Award. Alongside Kate Wilhelm (who also won for her story "The Planners"), she was the first woman to win a Nebula Award.

960s onward, McCaffrey became a prolific author. In 1967, Ballantine Books published her first novel, Restoree, which as quickly followed by a fixup novel, Dragonflight, the next year. The novel was the first of her popular Dragonriders of Pern series, bringing together “Weyr Search” and “Dragonriders” together into a single story. Two more novels came in 1969: a first contact story Decision at Doona and another fixup, The Ship Who Sang.

McCaffrey’s works, while frequently marketed towards a fantasy audience, were largely science fiction tales, influenced by the planetary stories of her youth, but equally influenced by issues that rarely made an appearance in the genre. Issues related to motherhood, not often (if ever) covered by her male counterparts frequently drove her stories, and her lead characters tended to be women.

The increasing use of female protagonists, increased visibility for female authors and the use of themes and stories that dealt primarily with women’s issues wasn’t a trend started by McCaffrey by any means, but she is an excellent example of the growth and development of said participation and usage. Following McCaffrey’s award wins in 1968 and 1969, Ursula K. Le Guin became the first woman to earn the Hugo Award for Best Novel in 1970 for her work The Left Hand of Darkness. More women writers would join them in the years to come, in award wins, recognition and spots on the bookshelf.

From the end of the 1960s to the present day, McCaffrey published dozens of novels, collections and short stories, winning a number of awards over the next 30 years, and frequently placed on the Locus and Science Fiction Book Club annual awards. She frequently collaborated with other authors, notably with her son, Todd, and continued writing her series of stories set in Pern into the 21st century. In 2005, she was named a Damon Knight Memorial Grand Master. On November 21st, 2011, she passed away at the age of 85 at her home in Ireland.