Another Month Ends, Another "To Be Read" Pile Grows 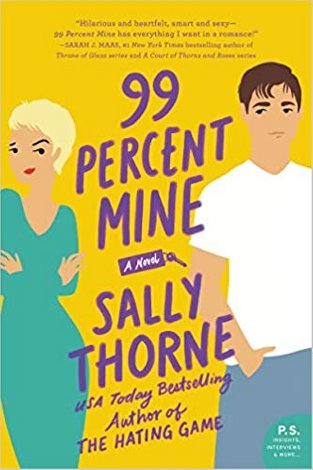 I’ve written about a few titles that released this month that I loved, particularly:

THE ONE YOU FIGHT FOR by Roni Loren (review)

However, there are a bunch of other January releases that have great reviews/are getting big buzz I haven’t had the chance to listen to yet.

Sally Thorne follows up 2016’s mega hit THE HATING GAME with 99 PERCENT MINE, “an unforgettable romantic comedy about a twin sister and brother struggling over an inheritance—and the sexy best friend who comes between them.”

If Darcy Barrett hadn't met her dream man when she was eight years old, the rest of the male population wouldn't be such a let-down. No one measures up to Tom Valeska, aka the best man on Earth, not in looks, brain, or heart. Even worse is the knowledge that her twin brother Jamie saw him first, and claimed him forever as his best friend. But everything changes when the twins inherit their grandmother’s tumbledown cottage and Tom shows up, bearing power tools—and single for the first time in a decade.

Will Tom ever see Darcy as anything other than a little-sister obstacle to get around? And can she stand up to her most formidable opponent—her twin? This time around, she's determined to make Tom Valeska 99 percent hers, and he's never managed to say no to her yet...

Any one read that one yet? Sounds YUM!

They say your first kiss should be earned. Mine was stolen by a devil in a masquerade mask under the black Chicago sky.

They say the vows you take on your wedding day are sacred. Mine were broken before we left church.

They say your heart only beats for one man. Mine split and bled for two rivals who fought for it until the bitter end.

I was promised to Angelo Bandini, the heir to one of the most powerful families in the Chicago Outfit.

Then taken by Senator Wolfe Keaton, who held my father’s sins over his head to force me into marriage.

They say that all great love stories have a happy ending.

I, Francesca Rossi, found myself erasing and rewriting mine until the very last chapter.

And somewhere between these two men, I had to find my forever.

Sounds super sexy! Anyone picked that one up yet?

Donna Kauffman’s covers for her Blue Hollows Falls are some of the prettiest out there, and LAVENDER BLUE might be the best one yet.

In the beautiful Blue Ridge Mountains lies a small town with a big heart—and a chance to begin again . . .

When Hannah Montgomery buys a lavender farm in Blue Hollow Falls with three friends, she’s creating a life she never imagined—one she hopes will honor the memory of the sweet young son she tragically lost years ago. Standing on the porch of the sprawling farmhouse, looking out on row upon row of those lush purple plumes, Hannah is ready to embrace this fresh, new start.

Then she meets Wilson McCall. The stonemason hired to fix their crumbling chimneys and leaky roof is quieter than most folks in the Falls. Hannah’s not surprised to learn the widower struggles with his own grief. Who could blame her if she finds joy in making Will laugh again, or if she feels a poignant kinship when she sees him with his teenaged son?  But her deepening friendship with Will reminds Hannah that there’s a part of her that still needs to heal—awakening a tender yearning to have a life that isn’t just good enough, but lived fully—even if that means taking risks once more.

Gia Gallo is officially in bridesmaid hell. Stranded in New York with her best friend's wedding dress, Gia has six days to make it to Florida in time for the ceremony. And oh-so-charming best man Bennett Buchanan has taken the last available rental car. Looks like she's in for one long road trip with the sexiest—and most irritating—Southern gentleman she's ever met.

Bennett's pretty sure that if there was ever a woman to break his "no flings" rule, Gia would be it. Sure, she's stubborn. She's also funny, smart, and the attraction between them is getting hotter with every state line they cross. While Bennett doesn't do casual, Gia doesn't do "relationships." But if they break the rules, this unlikely pair might discover that their impromptu road trip could turn out to be the best ride of their lives.

So what about you? What books have you read and loved this month? What titles did you add to your TBR mountain?