Ariel S. Winter and the Power of Pastiche 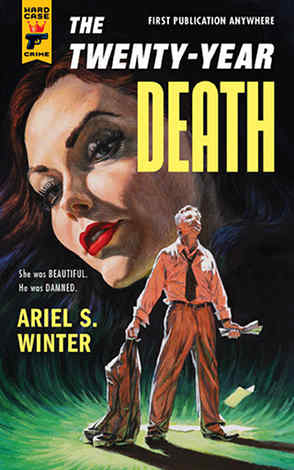 Not many crime-fictionists precede their debuts in the genre by releasing a work of fiction for preschoolers. But that’s exactly what Ariel S. Winter did.

The 32-year-old Baltimore resident and former bookseller saw his first children’s picture book, One of Kind, released in June. This month he follows that up with a dramatically dissimilar offering, an almost 700-page-long novel—The Twenty-Year Death—that’s really three self-contained (and individually titled) volumes in one, each set in a different decade of the 20th century and composed in a style reminiscent of a different mystery-writing master: Inspector Maigret creator Georges Simenon, first, followed by hard-boiled authors Raymond Chandler and Jim Thompson.

It takes a heap of chutzpah to tackle such an endeavor as this, and had Winter failed, he would have been savaged by reviewers for his conceit.

Fortunately, The Twenty-Year Death, though not perfect (especially in its rocky replication of Chandler), does a preponderantly superior job of leading readers through two decades in the downward spiral of a relationship between quick-tempered American wordsmith Shem Rosenkrantz (“very loosely based on F. Scott Fitzgerald,” according to the author) and his eye-catching, much younger French wife, Clothilde. Over that period, the couple are drawn into the midst of one shocking murder after the next, each scrutinized by a separate, uniquely perceptive sleuth. Unlike One of a Kind, this is definitely not a yarn for the young’uns.

I recently asked Winter about the intent and evolution of his new novel, as well as about his future as an author.

Did you start out to write The Twenty-Year Death as we see it now, or did it go through variations of construction and intent? And did it even begin as a work of crime fiction?

The book I originally set out to write was going to be Cloud Atlas as written by W.G. Sebald. There was a ruminative first-person narrator whose primary action was reading books. Each of the books the narrator read was presented in full.

The first book was a much shorter, earlier version of Malniveau Prison, which is book one of The Twenty-Year Death. The second was a romance set on [North Carolina’s] Ocracoke Island between an off-islander and the normal-sized child of retired circus midgets, which was a real stretch and fell apart on me, sort of bringing the whole original plan of the book down with it.

But I was proud of Malniveau, so I submitted it to an agent who encouraged me to expand it into a full-length novel. At that point, I wasn’t thinking of doing more than just that. But then the idea struck me: what would a series of mysteries look like if the character we follow from book to book isn’t the detective? The Twenty-Year Death is my answer to that question.

Why did you choose Georges Simenon, Raymond Chandler and Jim Thompson as your inspirations for the respective novels-within-a-novel?

When the book was going to be a Cloud Atlas-type book, like Cloud Atlas I wanted the different books to be very recognizable books of their type. I chose Georges Simenon for no better reason than I was reading a lot of his books at the time, loving them, and felt like I could do something much like one.

Once the book shifted with the idea of a mystery series that followed a secondary character, it made sense that the subsequent books would also be in the style of particular authors. I really liked the idea that we would see this character [Shem Rosenkrantz] grow over 20 years through the lens of the kind of crime fiction that was being written in each of those times. We saw him in 1931 through Simenon’s lens, so in 1941, let’s see him through Chandler’s lens, and with 10 years between the first two sections, we’ll jump to 1951 and Thompson’s lens for the third book. It was a way to say something about the way we perceive a character as a result of the kind of book he is in. …

Chandler came about for two reasons. The first was that the narrative demanded Chandler once I picked Shem Rosenkrantz as the main character of the book. He was an American writer living in France in the 1930s, and so many of the actual Lost Generation writers who lived in France later wrote for Hollywood. So where there’s crime fiction and there’s Hollywood, there’s Chandler. The second reason was just that I was a fan.

Thompson came about for a similar two reasons, although here the fact that I was a fan was the initial driving force. The other was that I wanted to maintain the 10-year jump from book to book, and that put us squarely in Thompson’s 1950s, so it gave me the excuse to adopt his voice for book three.

When you sat down to write like Simenon, Chandler and Thompson, what characteristics of their work were you hoping to capture? Their specific authorial voices, or just the kinds of stories they told?

Both. Simenon, Chandler and Thompson’s voices are so much about tone. And the tone is so driven by the characters. A Simenon character or a Chandler character or a Thompson character each carries a different kind of weight, a different brand of disaffected downtroddenness. So the attitude of each suffuses the writing, and that’s where the tone is. But to truly capture each author, it was also important to build the story in the way that each author built a story. There’s a determinedness to a Simenon plot that’s different than Chandler’s messier stumbling from event to event, which is certainly different than Thompson’s manic rush to destruction.

Did you find one author’s style more difficult to capture than the others?

Honestly, no. In retrospect, probably Chandler’s, simply since it’s so hard to do because so many people have done it and most not very well.

Perhaps it was a quirk of the advance copy I read of your novel, but I noticed in book two, The Falling Star, that even though much of the action occurs in and around Hollywood, you refer to private eye Dennis Foster as being from “S.A.,” rather than “L.A.” What gives?

It wasn’t a mistake; it stands for San Angelinos.

When I wrote Malniveau, I made up the town of Verargent whole-cloth, largely because I don’t know anything about small towns in France outside of what I’ve read in Simenon.

When I went to work on The Falling Star, I similarly didn’t feel confident about accurately writing Los Angeles, so making it San Angelinos gave me permission to make mistakes. But the precedent that truly allowed it is that Chandler himself calls L.A. San Angelinos in his early Black Mask stories, and in the canonical novels he uses Bay City as a stand-in for Santa Monica, so fictionalizing the locale was built into Chandler’s work.

Once I’d made up the places in the first two books, I had to carry it through in book three, so Police at the Funeral takes place in Calvert City instead of Baltimore, even though I’ve lived in Baltimore for 14 years. But again, it allowed me to make things up rather than research them when I wasn’t certain about Baltimore in 1951.

As a novelist, where do you see yourself heading next? Are you already working on a second adult novel? Will it be another work of crime fiction?

I did a rewrite at the beginning of the year on a novel I wrote long before The Twenty-Year Death called And Other Permanent Things. My agent had shopped it around, and we got a lot of positive feedback, but we heard the same criticism over and over, so I tried to redress those problems. It’s a story that all takes place in one day, about a family coming together for the eldest daughter’s engagement party, which is taking place only six weeks after the parents have announced they are getting divorced. On top of that, the younger daughter gets thrown out of her house that same morning for sleeping with her roommate’s boyfriend, so she’s moving back home in the midst of this. Needless to say, it’s not a mystery.

As for new works…I have a picture book script that I’d like to expand into a middle-reader [novel], and I have some vague ideas for another adult novel that’s not a mystery. But I’m not saying goodbye to the genre. I love it too much, and I know I’ll be inclined to write another one, perhaps a more traditional one, in the future.