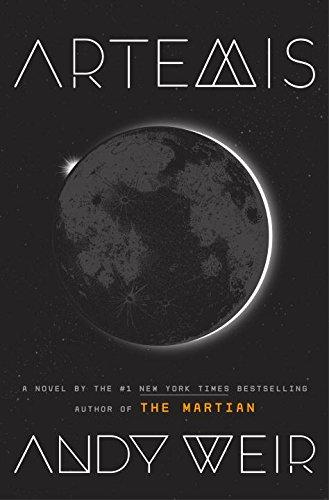 A couple of years ago, a self-published novel became an international bestseller shortly followed by a blockbuster film with an all-star cast (and multiple award nods). That book was The Martian by Andy Weir—you’ve probably heard of it.

This November marks Weir’s long-awaited return to science fiction with the publication of his sophomore novel, entitled Artemis. Like Mark Watney’s Mars, Artemis is a speculative fiction novel set in the near future, but using many of the constraints of modern day chemistry and physics (i.e. there aren’t any ships capable of FTL travel, nor are there terraformed solar system planets ripe for human habitation). In this second novel, we follow another pithy, whip-smart main character and first person narrator in the form of Jasmine “Jazz” Bashara—a young, resourceful smuggler/occasional screw-up, but with a heart of gold. On the moon, life is tough for the locals: there isn’t much space and a solid paying gig above bare minimum is hard to come by. Jazz, who has lived on the moon since she was six years old, does what she needs to do in order to get ahead. So, when she’s approached with a special new job—one that would require her to step outside of her comfort zone of smuggling in contraband from Earth—she jumps at the potential payday.

Of course, things don’t quite go according to plan.

While there are lots of things to say about Artemis—from a characterization and authenticity viewpoint, in particular—the book dives deeply into life on the moon and how such a society could work.  The tradition of the moon and its ingratiation in the sci-fi canon is strong—here are some other moon-centric SFF reads, inspired by (or as alternatives to) Artemis.

The Moon is a Harsh Mistress by Robert Heinlein. All cards on the table, I actually, passionately detest this book—but it’s a classic and nigh impossible to construct a moon-centric-SFF list without at least mentioning it. (And, hey, everyone’s different so maybe you’re into Heinlein’s characterizations and plotting style.) It is the future, and a colony on the moon rebels against the Earthers who tightly control all governance. There’s a sentient supercomputer, a spunky female character, and of course the resounding philosophy that “There Ain’t No Such Thing As A Free Lunch” (TANSTAAFL). YMMV.

Moonseed by Stephen Baxter. If you like Andy Weir’s tendency towards hard science, you’ll love Stephen Baxter. Moonseed is the third book in his NASA trilogy, but each book can be read as a standalone. In this novel, Venus explodes into a ball of gas, triggering a panic on Earth. Turns out the cause of Venus’s demise—and Earth’s, is a transformation has begun on planet that will eventually render it the way of Venus—has origins from the Moon, back when samples were brought to Earth by the Apollo missions.  A group of scientists race against the apocalypse to figure out why Earth is becoming increasingly like Venus, whereas the moon remains untouched and unharmed—leading to some intense conclusions. If you never thought geology was sexy, try Moonseed.

This Place Has No Atmosphere by Paula Danziger. And now for something completely different—This Place Has No Atmosphere is the story of a teenage girl whose family relocates to the moon as part of an early wave of colonizing pioneers. For her parents, it’s the opportunity for the lifetime. For a sixteen year old leaving behind friends, her crush, and everyone else? Not so much. I read this book first when I was a teenager and it has stuck with me ever since—Danziger does a beautiful job of capturing how life on the moon might work (and exactly how this would feel from a teenager’s perspective).

From the Earth to the Moon by Jules Verne (and Anti-Ice by Stephen Baxter). While this may not be Verne’s most beloved or well-known novel, From the Earth to the Moon is an SFF adventure-comedy about men who try to build a space gun to projectile-launch three men to the moon. In Stephen Baxter’s take on the classic tale, set in 1720, a unique material called Anti-Ice enables five travelers to actually reach the moon (using proto-steampunk science and methods). Both books are delightful good fun, especially if you’re looking to get from Earth to lunar orbit.

Life As We Knew It by Susan Beth Pfeffer. This is kind of a cheat since the novel in no way takes any place on the moon. But the moon is the single catalyzing factor for everything else that happens on earth in the story. Life As We Knew It is the story of an asteroid that hits the moon and ever so slightly changes its orbit, pushing the rock closer to Earth. The effects of this shift are catastrophic, and are narrated through epistolary style diary entries from the novel’s female teenage protagonist. This is a beautiful novel and one that I don’t think gets enough recognition—if you’re looking for character-centric authenticity and voice, Life As We Knew It is the book for you.

172 Hours on the Moon by Johan Harstad. Last but not least, there’s this translated work from Johan Harstad. A group of teenagers from around the world win a chance to live on the moon in a last-ditch effort from NASA to revitalize interest in space travel. The moon trip of a lifetime becomes a nightmare when strange things start to happen—an infection of fear and something more sinister begins to spread… A classic horror-sci-fi novel, expertly building tension to its frenetic and chiling ending, 172 Hours on the Moon delivers.

So there you have it! Our list of moon-SFF-centric reads. Any other recommendations for those looking to escape this world for the moon?