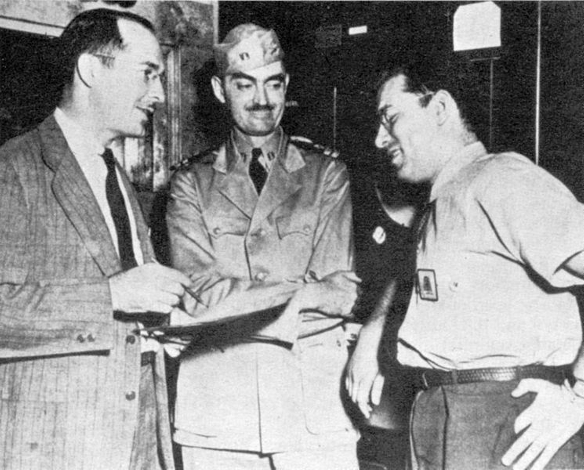 On December 8th, 1941, the United States found itself entering World War II. The Naval Station at Pearl Harbor, Hawaii had been attacked by elements of the Japanese military, killing thousands and damaging numerous ships. Author Robert Heinlein had been listening to the radio, realized that a ship he had been stationed on had been sunk during the attack, and felt a great sense of personal loss with the attack. While he would be rejected from active duty in the Navy, Heinlein found other ways to contribute to the war effort, where he found himself working alongside fellow authors Isaac Asimov and Sprague de Camp in Philadelphia.

World War II proved to have a chilling effect on the publishing industry. A number of notable authors joined the military, including Frederick Pohl, Cyril M. Kornbluth, Cordwainer Smith, L. Ron Hubbard, Arthur C. Clarke and others. Wartime shortages of paper led to the end of numerous smaller magazines, and would help shift the publishing industry from periodicals to novels. The war also led to an interesting grouping of three notable SF authors at the Naval Aviation Experimental Station in Philadelphia.

Heinlein had joined the Navy after graduating from the Naval Academy at Annapolis in 1929, where he served aboard the carrier USS Lexington, the destroyer USS Roper and the Battleship USS Oklahoma, before being discharged in 1934 due to poor health. With the declaration of war in 1941, Heinlein immediately called up the local Navy Personnel Office, and requested to be assigned to active duty. He then called his editor John W. Campbell Jr. of Astounding Science Fiction to call off a planned trip to New York City. Campbell hadn’t heard the news, but was understanding. The Navy, overwhelmed with similar requests, eventually rejected him for active duty, but a letter from a friend brought a new opportunity to contribute to the war effort. Lieutenant Commander Albert Scoles, in charge of the Aeronautical Materials Laboratory at the Naval Aircraft Factory in Philadelphia, Pa., asked Heinlein to write an article about the work in Philadelphia for Astounding, and if he'd like to join him at the factory. Heinlein accepted, and was shortly off to the East Coast, renting out his house to Henry and Catherine Kuttner.

Shortly before arriving in Philadelphia, Heinlein was met with continual delays. A bad mark on his personnel record for the Navy held up his clearance to work at the factory, where he would spend months trying to sort out the issue. Hired in the meantime as a civilian, he began his work. One of his first orders of business was to recommend to Scole that fellow author L. Sprague de Camp be hired. De Camp possessed a background in engineering, which they thought would fit well with the experimental work that they’d be conducting in Philadelphia. In the meantime, Heinlein continued to write for Astounding, with a serial story published in April and May of 1942, “Beyond This Horizon.” By May of 1942, Heinlein reported to the Naval Aircraft Factory as an Assistant Mechanical Engineer.

De Camp was willing to work with Heinlein, but faced a number of delays in starting. As he applied for a commission in the Naval Reserve, he contracted a case of Pertussis, which left him very ill and under the required weight to join the Navy. He headed to Florida to recover, and by May he was well enough to start. However, he found that in order to be commissioned, he would need to undertake training at Dartmouth College. With two months to go before courses began in New Hampshire, he likewise began work as a civilian engineer. In July he attended the Naval Training School at Dartmouth and, following his completion of the program, he commissioned as a full Lieutenant.

Heinlein's next recommendation was fellow science fiction author, Isaac Asimov. Asimov had become a regular staple in the pages of Astounding, and held a Master’s degree in Chemistry. Asimov first met Heinlein at Campbell’s offices when he visited to drop off his latest manuscript: a story called “Nightfall,” which was destined to be one of Asimov’s best known works. De Camp wrote to Asimov, offering him a position with the factory at the end of March, 1942, and he accepted.

Asimov had recently been set up on a blind date with Gertrude Blugerman, and was reluctant to move too far from Manhattan, but he rationalized that his labors “might serve as directly useful for that war effort, and I knew I could do more as a reasonably capable chemist than as a panicky infantryman, and perhaps the government would think so too.” His salary at the factory also helped to convince him, and in May, along with Heinlein and de Camp, he arrived in Philadelphia, where he began his work.

The Naval Air Experimental Station “was an awe-inspiring bustle of activity. The ground floor was a huge, open shop, with gantry cranes rumbling overhead, conducting engine tests (very loud) and structural stress tests.” De Camp described the factory in his autobiography as an airplane factory that had evolved over time to encompass experimental research for the Navy.

Heinlein was assigned to supervise a pressure chamber that helped with the development of the space suit, and also helped with the recruitment process for additional engineers for the factory. As he searched, he became furious at the lack of female engineers, going as far as to chew out the president of the University of Delaware over their policies. His time in Philadelphia was trying, and many noted that his health and nerves had begun to deteriorate over the time spent at the factory.

Likewise, de Camp oversaw an engineering section, which “perform[ed] tests on parts, materials and accessories for naval aircraft; and when called upon, to do original design and development work.” He also worked on the “Cold Room,” which allowed the engineers to perform low-temperature tests on the equipment, a welcome reprieve from the summer heat.

Asimov found that he didn’t enjoy his work. Philadelphia was notably humid that summer, which put strains on his new marriage; Gertrude, stuck at home while her husband worked six out of the seven days of the week, missed her family in New York City. Moreover, he saw the entire experience as a failure. In his biography, he noted “I’m convinced that if it hadn’t been wartime…I would have been fired. As it was, I received one promotion rather early in the game that raised my salary from $2,600 to $3,200 per year, and that was it. It was made quite plain to me, without its actually being said, that I should look for nothing else.” Furthermore, his writing slowed to a halt for the first year, while he focused on work at the factory.

Prior to his start at the factory, Asimov had published a couple of notable stories in Astounding: “Foundation” appeared in May 1942, and a follow-up, “Bridge and Saddle,” appeared shortly thereafter. When he returned to writing in 1943, he returned to the same universe, writing four additional stories: “The Big and the Little,” “The Wedge,” “The Dead Hand” and “The Mule,” all of which would eventually comprise the work for which he was best known: Foundation.

Heinlein continued to write as well, with a new story appearing in Unknown Worlds titled “The Unpleasant Profession of Jonathan Hoag.” De Camp seems to have held off on his writing, but following the war, he wrote a historical novel titled The Arrows of Hercules, which he wrote in many of his experiences of the time at the Naval Air Experimental Station in, and dedicated the novel to both Asimov and Heinlein.

As the war ended, Asimov was drafted into the Army, where he spent nine months before he was able to leave, where he returned to his studies and writing. Heinlein contemplated returning to writing full time, as a viable career, rather than as a side exercise. He left the NAES on the 17th of August, where he resumed writing and working on placing stories in magazines. All three authors would go on to have long, viable careers in the genre.

The shared experiences at the Naval Air Experimental Station were no large milestone in the history of science fiction. Asimov and Heinlein continued to write, and de Camp was certainly influenced by his time in Philadelphia, but at the end of the war, they returned to their work as authors. What this episode does reveal is the close nature of segments of fandom at this point in time: Authors networked through a close community of professionals and editors, during a time of intense crisis for the United States and the world at large. While their contributions to the war effort were likewise small, they were no less important to the eventual success of the Allies. In the end, it’s a curiosity: three authors working in a place that was very much science fiction just years before.