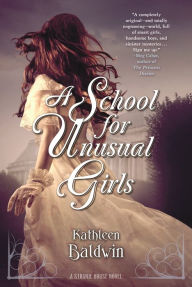 Stranje House is a strange place.

In the year 1814, Napoleon Bonaparte has been defeated and sent to the island of Elba—yet all of Britain remains leery of his exile. None moreso than Georgiana Fitzwilliam, the daughter of a gentleman in Regency era England, but with no intention of becoming a ruffles-obsessed debutante and pawn in her mother’s marriage schemes. Georgiana has much better things to do with her time, namely, the experimentation and perfection of her formula to create invisible ink (an invention that could have saved her late brother and several other soldiers in the war from early graves).

Unfortunately for Georgiana, however, her experiments…aren’t so successful. After burning down her father’s stables in her latest effort at concocting the ink, she is whisked away to Stranje House—aka the place where the British aristocracy send their troublesome, un-marriageable daughters to be disciplined and reformed by torturous and barbaric means.

Or so Georgiana thinks.

Stranje House is a strange place.

Each of the young ladies enrolled in the house’s dark curriculum are actually assets vital to England’s war effort, and their Stranje education enhances their unique skills. Georgiana is of special interest because of her skills in chemical compounds and scientific know-how—in particular, her invisible ink could mean the tipping point in conveying vital information in a volatile political environment.

Well, if she can learn to trust her fellow “prisoners” and get over her I-hate-you-I-love-you relationship with the hunky espionage Lord Sebastian Wyatt, who happens to live next door.

The core concept of Kathleen Baldwin's A School for Unusual Girls is a familiar one—and a premise that I happen to enjoy immensely. How could one not love a Regency-era setting, complete with debutantes, secret agents, and espionage on the grandest levels? Sure, this book isn’t exactly unique or memorable, and it has its formulaic pitfalls (e.g. the main character’s name is GEORGIANA FITZWILLIAM, and she falls in love with the rascal Lord Sebastian after basically a single encounter), but it’s fun. A lot of fun. And it put me in the mindset of many other similar historical romances for YA audiences—SF/F and non-SF/F alike—that I’ve read and loved over the years.

that was intrigued by the premise of A School for Unusual Girls and might be looking for more? This list is for you.

Etiquette & Espionage by Gail Carriger. The book that is most analogous to Stranje House is Gail Carriger’s Finishing School series, which kicks off with Etiquette & Espionage. Sophorina is enamored with mechanics and unladylike activities, and in her family’s attempt to refine the young girl, she is sent to Mademoiselle Geraldine's Finishing Academy for Young Ladies of Quality. Where she learns how to fit in with Society, yes—but also useful skills like how to throw knives and the finer arts of espionage.

Kat, Incorrigible by Stephanie Burgis. Ok, so technically this is a middle grade novel, but it’s probably my favorite of the entire subgenre because it is THAT good. The incredibly charming and, yes, incorrigible Kat Stephenson inherits a magical legacy from her mother; shenanigans, witchcraft, and romantic entanglements ensue.

Crown Duel & Court Duel by Sherwood Smith. This is a duology I read as a teen and rediscovered as an adult (along with many other delightful works from Sherwood Smith). Meliara is brave and resourceful, and with her brother she is determined to topple a corrupt King. When revolt is successful, she is embroiled in a new plot involving political intrigue and romance. Also: Vidanric.

Dreamhunter & Dreamquake by Elizabeth Knox. Another duology, Dreamhunter and Dreamquake are unexpected, challenging reads. Cousins Laura and Rose are the children of the world’s most celebrated Dreamhunters—that is, those rare few who can cross a magical border into The Place to catch and share powerful dreams with the world.

A Matter of Magic by Patricia C. Wrede. Another Wrede novel needs to go on this list—technically, another duology—because the Maerilon books are so fun. When guttersnipe Kim attempts to break into a magician’s house, she is caught...but then invited to be Maerilon’s apprentice. Under his watch, she learns of magic and solves great mysteries, and struggles to find her place in Regency  society.

Of course, this is just a small sampling of the books available in this subgenre. Are there any others you’d recommend?