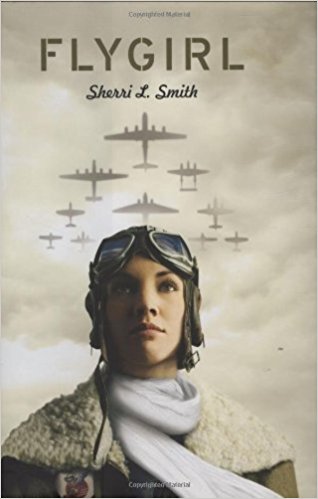 Her birthday, the day she died, the day she first realized she wanted to fly—if we tried, I’m sure that we could make any day into Bessie Coleman day. But today is an especially good pick, because ninety-six years ago, on June 15, 1921, Bessie Coleman earned her pilot’s license—the first African American woman, as well as the first woman of Native descent, to do so.

So, to celebrate Queen Bess, let’s take a look at some books about aviatrixes, real and fictional!

Picture books are up first, and even though I only included my very favorite Bessie Coleman one—I’ve read every one that I know of—and none of the Amelia Earhart ones, because everyone already knows about Amelia Earhart, there are still quite a few.

These two I’ve read, and they’re both beautiful, images and text alike. Grimes tells Bessie Coleman’s story through twenty poems and twenty different perspectives, and while each poem flows into the next and they’re all interconnected, they all also stand on their own. The Smith book is the only book on this list that deals with flight via hot air balloons, rather than airplanes, and the pictures of Sophie Blanchard standing all alone in a gondola hanging from a giant balloon, a zillion feet above the ground, are both gorgeous and terrifying.

I haven’t read these three, but they’re all about aviatrixes I’m unfamiliar with, so obviously I’m going to track them down, stat. They tell the stories of Betty Skelton, who started off as a stunt pilot, but then moved on to race cars and stunt boating; Ruth Elder, who was the first woman to attempt flying over the Atlantic Ocean; and Maggie Gee, one of only two Chinese American women to serve with the Women Airforce Service Pilots during WWII. Starred review on the the McCarthy book.

And now we turn to young adult, which is where we hit much more fiction, most of it historical:

When it comes to YA books about female pilots, Code Name Verity will probably the first book that comes to mind for most readers, both because it is entirely, gut wrenchingly unforgettable AND because of that whole Printz Medal thing. And all four of them are must-reads for anyone who wants meaty, emotionally complex stories about female friendship and flying and war. However! For the purposes of this list, I’m all about Black Dove, White Raven—a historical set in 1935 Ethiopia during the invasion by Italy—about the children of the American female barnstormers named in the book’s title. Starred reviews for all of the books EXCEPT that one, ironically.

I’m always here for Smith’s books, and this is one of my favorites. It’s about Ida Mae Jones, who joins the Women Airforce Service Pilots during WWII. They don’t accept Black pilots, but she passes as white—for her, the risk is huge, but she wants to help the war effort, and she wants to FLY, so she takes the chance. Books that deal with this theme—having to FIGHT for the opportunity to serve—always hit a sweet spot for me, providing a mix of inspiration and pure, unadulterated rage.

The Game of Love and Death, by Martha Brockenbrough

I’ve already written about this one at length, so I’ll let you click on through. Nutshell version? I loved it. Starred review.

No list of aviatrix books would be complete without SOMETHING about the Night Witches, the young Russian women who served as fighter pilots during WWII and struck terror into the hearts of the German forces. I can’t even talk about them without getting all weepy.

And finally, two outliers! Neither of these books is directly about flying, but they’re both great books, and there’s enough of a connection, so I’ll allow it. Mare’s War is about the present day road trip of two sisters and their grandmother, and about their grandmother’s service in the 6888th—an all female, all Black battalion—during WWII. Planes are involved. The Cardi is a contemporary about a girl whose mother believes she’s Amelia Earhart, and so is actually more about family and mental illness and loss than it is about, you know, flying. But Amelia Earhart, so here we are. Starred reviews for both.

As always, if you’ve got some to recommend, let me know!