Bond Goes for the Gold 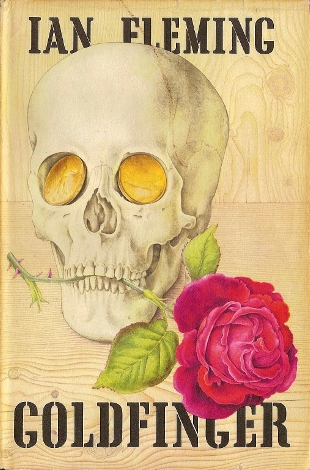 My father was a huge fan of the James Bond movies, much to my mother’s chagrin. (She never did learn to appreciate author Ian Fleming’s male-oriented sex-and-spy fairy tales.) So I was pretty young when I came to know Agent 007. I remember huddling with my dad and brother around our family’s undersized black-and-white TV set, sometime in the mid-1970s, to watch Dr. No (1962), the picture that had introduced actor Sean Connery as Fleming’s quick-witted and lascivious British intelligencer. However, it was Connery’s third Bond film, Goldfinger—which had its worldwide premiere in London 50 years ago this month, on Sept. 17, 1964—that drew my keenest attention as a boy.

Beyond the fact that Goldfinger featured a nearly naked woman, coated in gold paint and sprawled across a bed, it also happened to be the first flick in which 007 ordered a martini “shaken, not stirred”; the first that found him driving an extensively modified Aston Martin DB5 (with passenger-ejection seat!); the first to boast a memorable henchman (the mute Korean bodyguard, Oddjob, owner of a deadly bowler hat); and the first to showcase a suggestively named femme fatale (Pussy Galore). Beyond all of that, Goldfinger was the first Bond picture to be introduced with a theme song, in this case sung by Shirley Bassey. (Amazingly, that song almost didn’t make it to the final cut.)

“Of all the Bonds,” wrote Chicago Sun-Times movie critic Roger Ebert in 1999, “Goldfinger is the best, and can stand as a surrogate for the others. If it is not a great film, it is a great entertainment, and contains all the elements of the Bond formula that would work again and again.” Adds The HMSS Weblog: “Where Dr. No and From Russia with Love [1963] were wildly successful, Goldfinger turned 007 into a phenomenon.”

Not until many years after discovering Goldfinger on the big screen did I finally get around to reading the 1959 novel from which it was adapted. I had earlier picked up a much-thumbed copy of Fleming’s Diamonds Are Forever (1956), his fourth Bond thriller, while on a travel-writing assignment to the Caribbean and been enticed to further sample his 14-book series. When publisher Penguin’s U.K. division released a beautiful new line of Bond adventure reprints in 2008, I determined to collect those titles I hadn’t already enjoyed—Goldfinger, the seventh and longest James Bond work, being among them. Recently, with an eye toward the film’s semicentennial, I plucked Goldfinger down from its shelf again, curious to see how the book held up in a re-reading, and how closely its plot followed that of the movie.

The tale finds our snappily attired hero in Miami, Florida, where he’s stuck waiting for a delayed plane trip to New York City. There he encounters Junius Du Pont, a rich American businessman with whom he’d gambled years before (in the initial Bond novel, 1953’s Casino Royale). It seems Du Pont has had a record run of bad luck lately while playing canasta against Auric Goldfinger, a mysterious Latvian expatriate jeweler. Although Goldfinger seems deep-pocketed enough not to have to

resort to such subterfuge, Du Pont believes that he’s cheating him at cards, and he wants Bond to figure out how it is being done. Without too much trouble, 007 ascertains that Goldfinger has a confederate, a shapely blonde named Jill Masterson, who has been spying on Du Pont’s hands from a hotel balcony. Bond quickly contrives a way to stop the cheating and blackmail Goldfinger into returning Du Pont’s money, then leaves Miami for Manhattan with Jill in willing tow.

After returning to London, Bond’s no-nonsense superior in the Secret Intelligence Service, M, assigns him to investigate the suspiciously wealthy Goldfinger, who may be connected to the Soviet counter-intelligence organization SMERSH, and who the Bank of England believes might also be carefully orchestrating a gold-smuggling operation that threatens the stability of international currency markets. The first step is for 007 to “accidentally” bump into Auric Goldfinger again, which he does on an exclusive golf course in Kent. Fleming frequently employed high-stakes games in his novels, whether of the gambling or athletic sorts. Such contests provided James Bond with a way to test the skill and daring of his adversaries, to take a greater measure of them as threats. In Goldfinger, the espionage agent arranges to play a round of golf with his latest adversary, during which Bond realizes that Goldfinger is defrauding him as surely as he did Du Pont. With cleverness and guile, 007 ultimately turns the tables on Goldfinger, but leaves the jeweler both angry and suspicious.

By this point, distinctions between the novel Goldfinger and its silver-screen cousin are becoming more and more obvious. In the ’64 film, for instance, Jill Masterson is murdered in Bond’s Miami hotel suite, evidently by Oddjob, who covers her completely in gold paint, thereby causing her “epidermal suffocation.” The book has her being killed by the same means, only offstage, after she and Bond had said their farewells in New York. (This body-painting ritual is something Fleming’s Latvian villain reportedly engages in with one female companion each month. “He does this,” wrote O.F. Snelling in his 1964 study, 007 James Bond: A Report, “because by carnally possessing a golden girl he gets as near as he can to marrying the precious metal, which he loves above all else.” Of course, most of the painted women depart Goldfinger’s company with a stack of cash, rather than a toe tag.) As to the golf scene, in the novel it follows Bond and Goldfinger through a full 18-hole match, and takes almost 40 pages to tell. The movie pares the game down to only the final holes, but loses nothing of the scene’s tension or intent in the process. (That paring was, however, partly responsible for making Goldfinger one of the shortest Bond flicks yet.)

Golf isn’t Goldfinger’s principal game in this book, though. He has a much larger and more complex scheme in the works, as Bond will soon realize.

After following the bullion-obsessed millionaire and his Korean factotum, in their armor-plated Rolls-Royce, all the way to Switzerland, and then rescuing Goldfinger from assassination at the hands of Jill Masterson’s vengeful sister, the naturally attractive Tilly, 007 and the girl are captured by Goldfinger’s henchmen, and Bond is threatened with death by chainsaw (or by

laser beam in the film). The novel finds him escaping this gruesome demise only by promising to help Goldfinger with his grand plan: stealing the riches from Fort Knox, the gold repository in Kentucky. (That the filmmakers decided to alter Goldfinger’s plot—to make him intent, instead, on irradiating the Fort Knox reserves with a dirty bomb—can only be guessed at as a way of exploiting then current fears about the spread of nuclear weapons during the Cold War.) Recruited as well to execute this big-scale knock-off are several notorious mobsters, including a lesbian former trapeze artist, Pussy Galore, who’s said to be “the only woman who runs a gang in America.” That this pale, black-haired cat burglar should have been transformed into a cinematic siren in the shape of Honor Blackman (onetime co-star on The Avengers), who played Pussy as the leader of an all-female contingent of stunt pilots, can only be attributed to the movie’s need for a more prominent “Bond girl.”

I’d forgotten how politically incorrect Fleming tended to be. Writing during an era when sexist epithets and racist attitudes might still be overlooked, he featured both in his fiction. Adopting a macho stance for his mostly male readership, he could be especially insulting to gay men and women. Deep into Goldfinger, for example, is this passage:

Bond came to the conclusion that Tilly Masterson was one of those girls whose hormones had got mixed up. He knew the type well and thought they and their male counterparts were a direct consequence of giving votes to women and ‘sex equality.’ As a result of fifty years of emancipation, feminine qualities were dying out or being transferred to the males. Pansies of both sexes were everywhere, not yet completely homosexual, but confused, not knowing what they were. The result was a herd of unhappy sexual misfits—barren and full of frustrations, the women wanting to dominate and the men to be nannied. He was sorry for them, but he had no time for them.

A modern reader might well be put off by Fleming’s sometimes narrow-minded worldview. And if that was most of what the Bond novels had to offer, then I would wholly endorse your giving them a pass. But while Fleming wasn’t an artful prose stylist, his plots were intriguingly constructed and his action sequences routinely captivating. It’s no wonder that Hollywood took an early interest in his espionage thrillers, going back even before Dr. No to a 1954 CBS-TV adaptation of Casino Royale starring Barry Nelson as “Jimmy Bond.” Or that the creators of the 1960s TV spy drama The Man from U.N.C.L.E. solicited the author’s help in launching their series.

Goldfinger, with its wildly implausible plot so dependent on coincidences, doesn’t always rank among readers’ favorites from the Bond canon; Moonraker (1955), From Russia With Love (1957), Casino Royale (1953) and Thunderball (1961) typically score higher. Yet this 1959 thriller is a splendid companion to the Connery picture, offering a great deal of interesting background to the action taking place on-screen. We’re also given a deeper understanding, in the book, of Auric Goldfinger and the adversarial relationship with 007 than the film, for all its strengths, portrayed.

As I re-shelved my copy of Goldfinger, I knew it was only temporary; that someday, when I next crave a good old-fashioned shot of espionage fantasy, I’ll be pulling it down to read again. Someday soon.