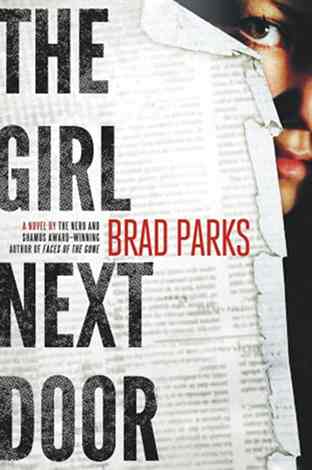 New Jersey-born author Brad Parks spent two decades writing for newspapers, beginning as a teenager and leading to his employment with the Garden State’s largest-circulation daily, The Star-Ledger. He finally left the troubled world of print media in his mid-30s, hoping to make a new name for himself penning crime novels. Which he promptly did: His first book, Faces of the Gone (2009), won both the Nero Award (presented by the Nero Wolfe fan organization, The Wolfe Pack) and the Shamus Award (given out by the Private Eye Writers of America).

Did you read the Rap Sheet’s preview of re-released Fu-Manchu thrillers?

Since then, Parks has produced two more books, all featuring Carter Ross, his investigative reporter for New Jersey’s Newark Eagle-Examiner: Eyes of the Innocent (2011) and The Girl Next Door. That latter work, which will reach bookstores next week, finds the congenitally WASPy and strait-laced, yet self-deprecating and occasionally hilarious Ross stumbling into a homicide case—one that involves a woman who delivered the Eagle-Examiner, and may result in the prosecution of his paper’s much-maligned publisher. At the same time, Parks’ protagonist has to negotiate the inappropriate sexual advances of his editor, Tina Thompson, and pursue a wild bear through the less-than-wild outskirts of Newark, assisted by a Thoreau-quoting intern of bruin-like proportions.

Below, Parks talks about his newspapering history, his interest in writing The Girl Next Door and Carter Ross’ value as a story narrator.

As a onetime newspaperman myself, I love your series’ setting in that deadline-driven world. How did you get into the newspaper game?

I always say I got into newspapers for the money and the sex. It’s actually true: I was 14 years old and saw an ad in my hometown weekly, The Ridgefield (Conn.) Press, saying “sportswriters needed.” The job paid 50 cents a column inch, which is more than I could make babysitting. That was the money.

The sex? The assignment involved covering the Ridgefield High School girls’ basketball team. I was, at the time, short and fat and awkward. They were all tall and blond and gorgeous. But I figured if I was the guy who could get their names in the paper, they’d at least have to talk to me. Alas, the sex part never worked out. But, slowly, I came to realize that storytelling was meant to be my life.

How did you become interested in composing crime fiction?

I started reading John D. MacDonald when I was probably 12 or 13, because he was my dad’s favorite author. Luckily, Dad had good taste. By the time I was an adult, my idea of a great vacation involved packing two bathing suits and seven crime novels. What else was I going to write?

The Girl Next Door finds investigative reporter Carter Ross working on a human-interest piece about a home-delivery worker for the Eagle-Examiner, Nancy Marino, whose shocking death on her regular route turns out to be far less straightforward that it seemed. What was your impetus in tackling this particular tale?

I usually start with an issue I hope to tackle, then imagine a crime that might result from that. In Eyes of the Innocent, for example, it was the subprime mortgage scandal and all the crazy house-flipping, speculation and corruption that fueled the real-estate bubble—and the messiness that ensued when it burst.

I knew in The Girl Next Door I wanted to explore the struggles of the modern newspaper industry. So it seemed logical to have the victim of the crime be someone who was intimately involved in that wrangling. Mind you, I wrote the first draft of this novel in 2009—starting it just a few months after I took a buyout from my newspaper job. So I was probably too preoccupied with the state of newspapers—and what it had done to my life—to write anything else.

In the book, Ross isn’t planning to pursue Marino’s death any further than is necessary to compose an expanded obituary. But then he’s approached by her sister, who raises doubts about the car accident that killed Marino, and the story expands from there. How many times, in your own reporting days, were you approached by people at the edges of stories, who tried to push you into investigating further? And were you as responsive to them as Carter is to Marino’s sister’s encouragement?

As a reporter, I always found the best stories were the ones you found in the places you least expected, so you had to keep your ears open for them all the time. Hopefully, I did it as well as Carter did. But I doubt it. Carter tends to be the vessel for all my unrequited journalistic desires, therefore I’ve made him a much better reporter than I ever was.

You always have great fun with newspaper interns in your novels. In Eyes of the Innocent, it was a bubbly blonde called “Sweet Thang.” In The Girl Next Door, it’s an over-literate former jock named Kevin Lungford, aka Lunky. Have you enjoyed working with many such “indentured servants” over the years? And who was the most interesting such character you helped usher into newspapering?

Yes, I worked with many interns. Yes, I enjoyed their charming naïveté and boundless energy. No, I’m not giving away the exact source of my material on this one. Suffice it to say, every intern I’ve written so far was at least partly inspired by real-life people, who I then twisted for fictional purposes. The interns exist as much for my amusement as a writer as anything in the plot.

Although your novels can be compelling, your protagonist, Carter Ross, isn’t the bravest, most polished, or even the quirkiest sleuth around. What were you hoping to achieve by making him such a fade-into-the-background figure?

As a newspaper reporter, you’re always taught that you’re not the story. I guess that’s what I was aiming for with Carter. He’s your storyteller, of course. But hopefully—a few quips and editorial comments aside—he doesn’t get in the way of the story that needs to be told.

Tell me you’re not as boring as your lead character.

No. I’m much, much, much more boring. Carter at least has a love life. I’m married. Wait, that came out wrong…

But it does remind me that, if for no other reason, your books are worth reading for their wittiness. How did you acquire your sense of humor, and do you use it as a self-defense mechanism in your real life?

I was the youngest child in my family, and I think the youngest can often tend to turn into a bit of a clown. I was also teased relentlessly in middle school and early in high school—because, surprise, I was a dork—and at some point I probably learned that if I just made fun of myself, people would stop doing it for me.

Finally, what did you learn in writing this third Carter Ross book that you wish you’d known starting out as a novelist?

This may sound funny for a fiction writer, but I feel like I finally started learning how to make stuff up in the third book—and, furthermore, that it was OK. This, again, is my journalism background coming out. As a reporter, you’re not allowed to make stuff up. You’ll get fired if you do. So the first two books tended to be pulled almost directly from experience, whereas the third comes a little more from imagination. I’m curious to know what the first two books would have looked like if I had been a little freer in that regard.