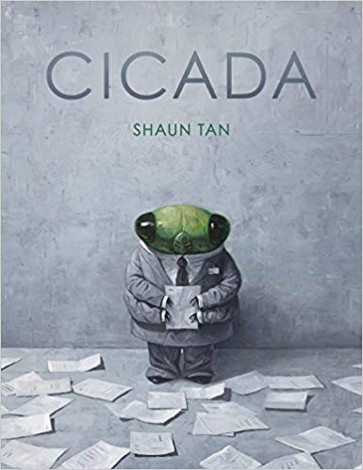 I didn’t need any author blurbs or glowing review excerpts to convince me to read Shaun Tan’s newest picture book, the multi-layered Cicada, but my interest was certainly piqued when, before cracking it open, I saw a line from the Guardian’s review of the book that described it as “horrifying and humorous.” A picture book that is horrifying and humorous? I’m in. I’m so totally in.

Cicada, first released in Australia and New Zealand and on shelves here in the U.S. at the end of this month, is what Tan describes as the “simplest” book he’s ever done. (That quote comes from the same Guardian piece, which I highly recommend reading, especially if you’re a Tan fan and/or you enjoy reading about the process of picture book-making.) Indeed, it is a traditional 32-pager; the text is spare; the compositions are unfussy; and the palette is dominated (given the subject matter at hand) by a fairly monotonous grey. It is the story of a cicada, working in a sterile, cubicle-filled office environment, surrounded by humans.

To say the cicada is underappreciated and marginalized doesn’t quite cut it. He is disregarded in every way, save a few moments in which he is bullied or treated with utter contempt. (In one illustration, we see a human literally stepping on him.) He has worked in data entry in a tall skyscraper for seventeen years—never taking a sick day yet never receiving a promotion. “Human resources say cicada not human,” we read. “Need no resources.” Since he can’t afford housing, he lives in the office wall space. (“Company pretend not know.”) He’s dedicated, hard-working, and reliable—Tan paints him in a stiff, grey suit, too large for his small body and with four arms to accommodate his cicada-ness—but when it’s time to retire, he does so in a penniless and forlorn state, not even receiving so much as a handshake from his boss. He heads to the roof of the office complex where he works. Just when you think he’s going to jump, ending it all—this may be where the “horrifying” comes in for some readers—a transformation occurs. It is here that the book’s tone, mood, and palette shifts dramatically. I won’t tell you what the creature’s transformation is, though I’m sure you can guess. But I can’t bring myself to spoil the book’s end for you, especially given that there is a laugh-aloud funny and rather eye-opening line on the final, illustration-free spread.

This is a story that brings to mind the plight of immigrant workers here in the U.S. (though in the Guardian piece, Tan also talks generally about those “who might be a little more quiet or overlooked”). It is with this symbolic and eloquent empathy that the story is infused, and it’s never too heavy-handed. In fact, in the aforementioned Guardian piece we read that the cicada character reminds Tan of his father, who moved as a young man from Malaysia to Australia; Tan says his father’s English skills were poor and that he always sensed that his father, during that time of his life, was underappreciated.

To capture the sound of a cicada, Tan writes repeatedly: “Tok Tok Tok!” It is the last line of each page, save a series of five wordless spreads towards the book’s close. This creates a distinct rhythm and, for me as I read the book, a kind of cryptic suspense. (There is also a great deal about those lines that are open-ended. What precisely do the “tok”s mean? Are they meant to sound like a clock’s endless ticking, as well as imitate a cicada’s song? Could they mean something more? Cue rich discussions for students.) The fragmented language on each page is haiku-like—not in syllable count or line numbers, but in the way that Japanese haiku captures an essence or moment in time. The book even closes with haiku about a cicada from 17th-century Japanese poet Matsuo Bashō. This haiku is also, fittingly, about persistence and patience and strength, which is very much the story of Tan’s cicada.

In his illustrations, rendered via oil, Tan masterfully captures the bleak, colorless world of the cicada’s occupational life. He uses touches of brilliant green for the creature’s head; in one illustration, we see a series of bland cubicles in overwhelming grey tones, and in the center is the cicada’s green head, the light from his computer monitor his only salvation. The change in the book’s palette that occurs in the final spreads, when the cicada experiences a release, is so much joy on the page, a welcome sight for readers’ eyes.

This “horrifying and humorous”—and even haunting—story seems, to me, like a fitting New Year’s tale. Undoubtedly in January, there are folks all over who, once “Auld Lang Syne” has been sung and the champagne bottles have been emptied, commit themselves to doing what they can to break free from the tedium and dreariness of their lives, occupational or otherwise. (To be sure, privilege in its many forms has a hand in the success of such a venture.) Then again, it’s a story that can be read in many ways, and part of its beauty is the unanswered questions it leaves as a gift to readers. After all, Tan says at the Guardian, this is what good art does—it reminds you of different aspects of yourself or those you love, and it leaves you with ambiguities worth sitting with for a while.