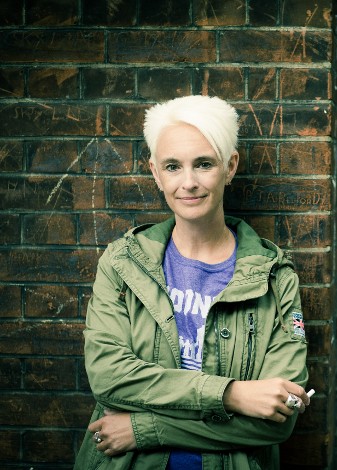 When C.J. Tudor was growing up in Nottingham, England in the 1980s, she read detective stories and ghost stories that would keep her up for weeks with nightmares. She and her friends passed around Stephen King novels, terrified themselves by reading them, then left their houses looking for similar frights outside, in their town and in the woods. Decades later, Tudor wrote her debut novel The Chalk Man out of her fascination with the dark secrets and hidden horror of small towns.

In small towns, you’ve got this hothouse for stuff to happen—accusations, for arguments, for fallouts, for resentments,” Tudor says from a suburb of Nottingham where she wrote The Chalk Man and currently lives. “It’s the perfect breeding ground for mystery.” In the novel’s setting, Anderbury, a fictional town based on both Nottingham and a small Wiltshire town where Tudor was born, multi-generational resentments and quickly spreading gossip create crucial tension between characters, and much of the plot’s misdirections.

Tudor’s protagonist, Eddie, is a character that could only work at the center of a small-town mystery. Positioning Eddie as both suspect and detective, Tudor unspools the story from both Eddie’s childhood in Anderbury in the mid-eighties and his adult life in contemporary times in the same town. Scarred by a series of violent events that happened in his youth, Eddie, now middle-aged, tries to resolve two linked mysteries—one in his past and one in his present. Many of the players are members of Eddie’s childhood friend group, potential lovers, past crushes, scary teachers, and bullies. At several points, the story probes how much the adult Eddie is willing to remember about the events of his childhood and how clearly he is able to see his relationships with his childhood friends.

“It seemed to work, the idea of something that happened in the past coming back to literally haunt you in a way, and a past that’s not quite resolved,” Tudor explains. She wrote the past sections first, drawing heavily on her own childhood—even getting her own childhood friends involved in the process of creating young Eddie’s world—then threaded in the chapters in which the adult Eddie sorts through his past.

This back and forth between young Eddie and old Eddie could be jarring but Tudor blends her tones well. Young Eddie’s life is much darker than most writers would dare to portray. “I think sometimes people forget that kids are actually less innocent and a lot darker than we give them credit for, and that they’ve grown up quicker than you think,” she says. Tudor stayed true to what she was fascinated with as a child—“the sort of dark side of the universe and dark things happening in very ordinary environments”—to help her create credible characters. The kids the novel are in the dark about what’s going on with the adults in their lives, and highly imaginative about what lies within that darkness. Her adult Eddie, while jaded by his past, still retains a childlike curiosity about his environment that propels him through his amateur detective work.

“I find writing about children easy,” Tudor says. “Maybe that’s because I’ve never really grown up.” The novel, in fact, was inspired by a game she played with her toddler daughter on her birthday. They spent the afternoon covering the driveway with chalk stick figures. When playtime was over, they went back inside the house, and Tudor forgot about the drawings. Later that night, when Tudor let the dog out, she was confronted by the stick figures lit in the dim glow of the security light. “They just looked really, really sinister. And then I thought, Oh I can do something creepy with that.”

Alexia Nader is a writer in San Francisco.